Showing posts from December, 2019
Show All

14 Reasons To Visit The Franconian Beer Festival in Nuremberg

I recall once writing an article entitled "Why I'm Over Beer Festivals" which turned out to be one of my most popular blog posts, clocking up over 9,000 views after somehow going viral on Reddit and in several of those  Facebook groups. Even after I wrote it, I still kept going to beer festivals. I just get sucked in because people I know will be there, which is arguably the best part of them. The one beer festival I absolutely had to  visit being the lager lout that I am, was the Franconian Beer Festival in Nuremberg and here's why: 1) The Setting  - Imagine a beer festival in the moat of such a castle in a beautiful city as Nuremberg where you can look up at the large walls and high towers, shaded but still warm in the summer. That's how I can describe it. People talk about the IMBC venue being special, but I challenge you to visit The Franconian Beer Festival and not fall in love. 2) Free Entry  - Yup, you don't pay a single cent to get into th
2 comments
Read more 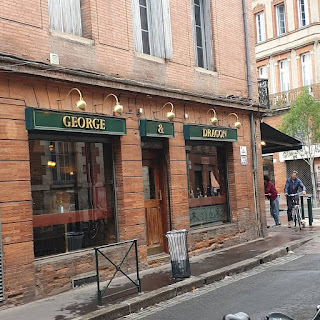 When I booked my trip to Toulouse for September I wasn't really sure what to expect from the city and its beer scene since very few people I know had spent time there so I did some googling, as you do. What I found surprised me as it was unlike any other city I've been to in that many of the pubs and bars seemed to be modelled from the British style of pub. I'd heard previously that Charles Wells had a chain of pubs in France and once I'd done some research I was determined I needed to check it out, and when I did it surprised me. The George and Dragon  is situated on the corner of an unassuming narrow residential street, at the foot of a cross road near a couple of cafes and could well be described as an estate pub had it been in Stockport and not Toulouse. There were a couple of tables out the front of the pub, with old chaps standing around chain smoking cigarettes, slowly drinking their dark amber coloured beer and occasionally engaging each other in convers
2 comments
Read more
More posts