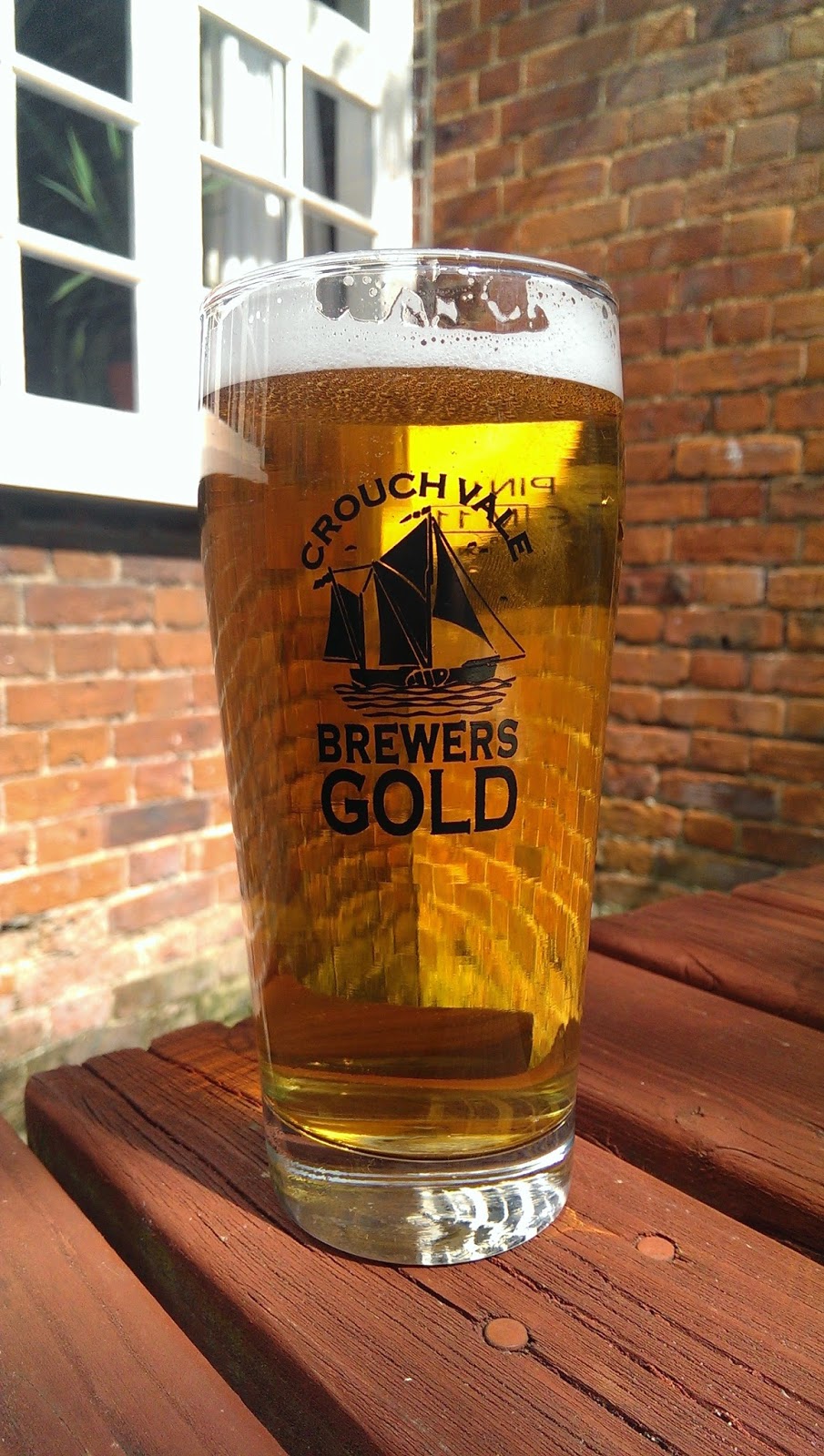 The other Sunday Emily and I were on our way back to her house in Gorleston, from mine in Norwich and we were hungry. Not regular hungry but superhuman hungry. We decided to go the long way back instead of the straight route down the A47 so we could find a pub to go to for lunch. After passing several that didn’t look too appealing, I said to Emily to turn down towards Chedgrave/Loddon way as I recall going through there once and noticing several pubs.

We decided to stop at the first one we saw, The White Horse, as it had a rustic look yet there was also something modern about it. It turned out to be a good decision.

We parked up and walked past the pub’s own bowls green and past the families who were just finishing up lunch, with the kids running around and screaming because obviously the sugar in dessert and the copious amounts of coca cola was too much for them to handle.


We walked into the pub and up to the bar – there were a few hand pumps with Young’s Bitter, Timothy Taylor’s Landlord, Woodforde’s Wherry & Adnams Bitter… so not a varied selection by any means. And then I noticed Crouch Vale Brewer’s Gold, which is always a delight, and to my surprise it was served in a rather fetching branded glass! Standard reporting here and it was just the usual suspects on keg. Emily just had a coke as obviously she was driving. 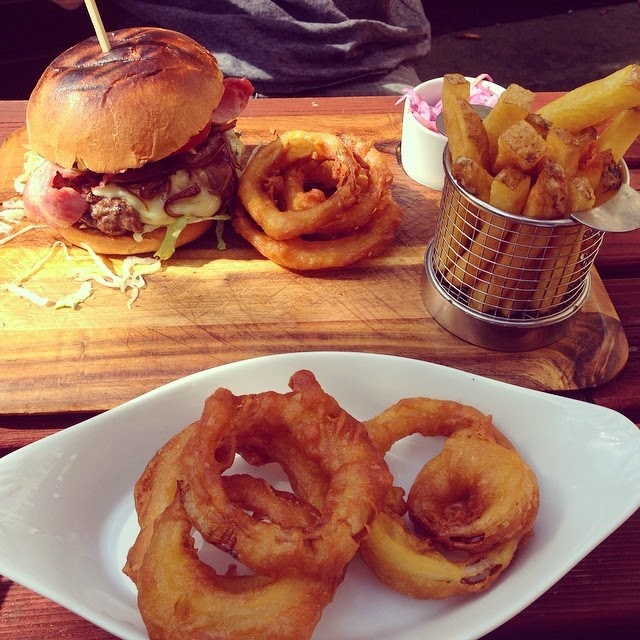 We sat down outside in a quiet corner by the back door, away from the children (or so we thought – after a while we discovered that the kids were constantly running in and out of the pub being rather annoying) and after a while we were given menus. We’d decided upon what we wanted and a different server came to take our order.

When I asked for “the burger please” I got a look of confusion followed by “Just a plain burger?” to which I replied “Y’know, the one on the menu with onions and bacon and cheese?” at which point she was leaning right over my shoulder try to look at the menu before it clicked… “Oh, that burger”.

Emily ordered the breaded plaice fillets with chips, mushy peas & tartare sauce which she was happy with. We also split a side of onion rings. 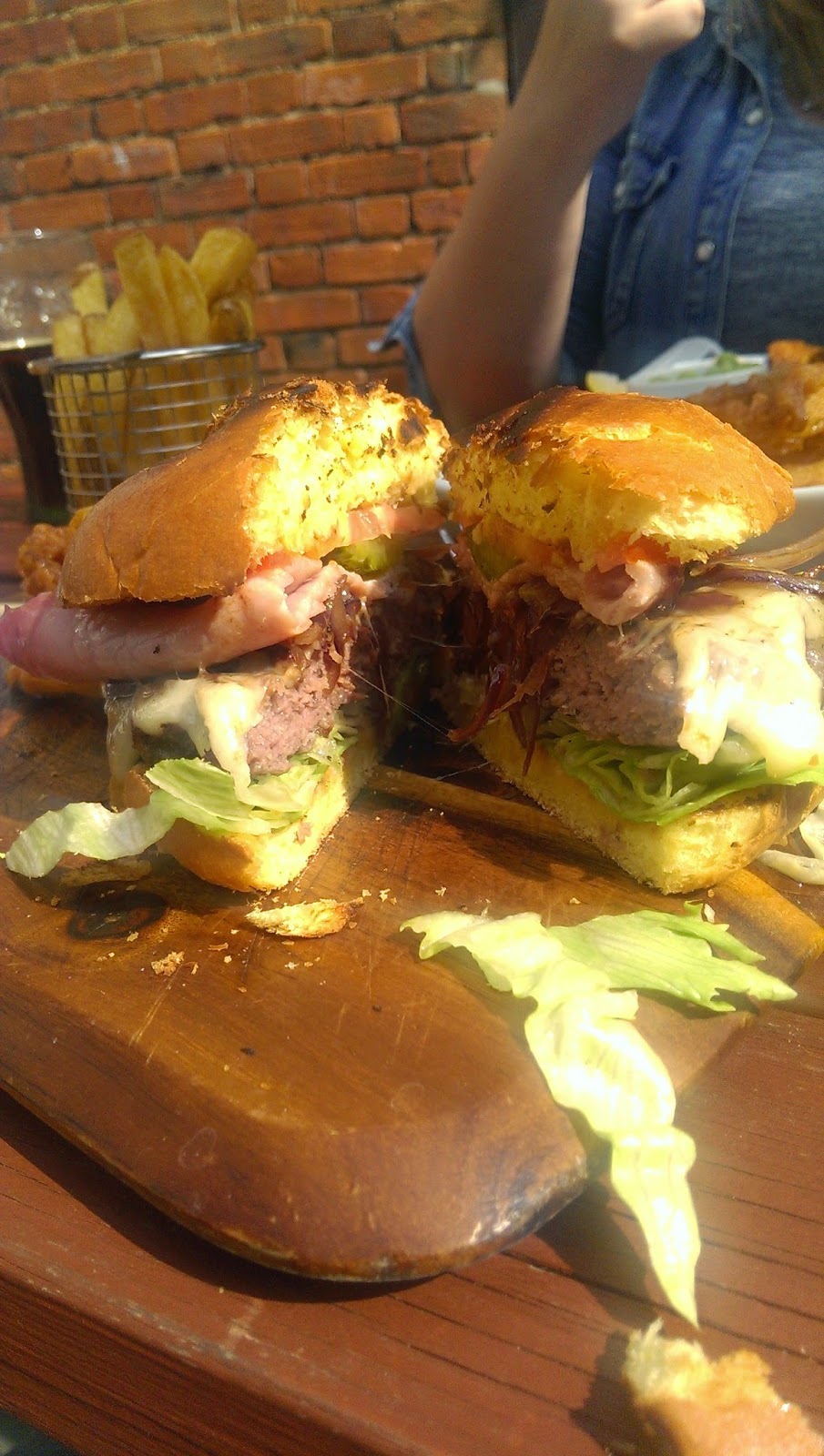 It was a handmade beef burger with caramelised red onions, bacon, gruyere & salad on a brioche bun with a side of red cabbage coleslaw, onion rings and crispy skin on chips.

Now here’s the thing – as nice as presentation was, I don’t want my burger served on a chopping board with the chips stood up in a wire basket making it impossible to put salt on them, or cover them in favourite combination of ketchup and mayo.

The chips were absolutely brilliant though – crispy on the outside, fluffy on the inside and just delicious. I would have preferred to be able to add sauce to them and while it’s true that I could have put them on the chopping board, there was very little space with everything else on!

The onion rings were possibly the best I’ve ever had – they were massive, filled with tangy, sweet onion with delightfully crunchy batter that wasn’t ridiculously greasy.

The burger, as you can see, was rather massive! I figured there was no way I could actually eat it in the way that burgers were designed for, by picking it up and biting. It was just too… filled with stuff, which isn’t a bad thing. I decided cutting it in half would help – it didn’t. I ended up eating it with a knife and fork and loved every second of it. 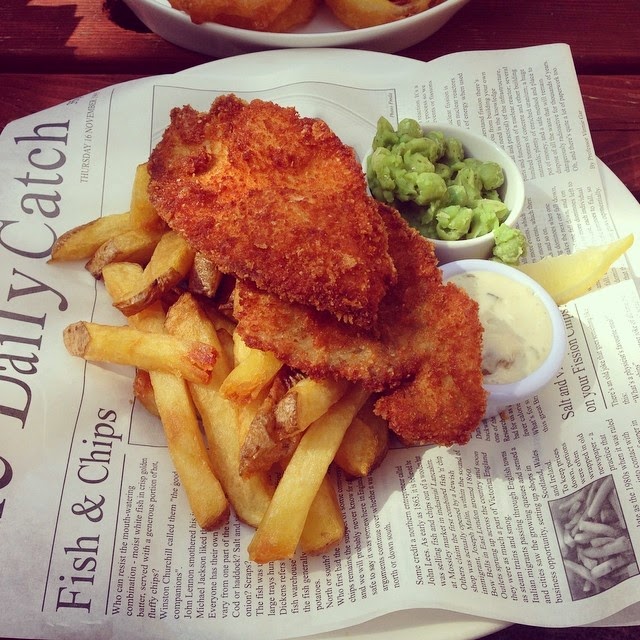 The sweet bun… the salty bacon and burger, the fresh salad underneath it and the gooey melted gruyere cheese helping it get that little bit unhealthier. Each bite was a delight quite simply and I left feeling so full!

Emily enjoyed her plaice fillets too and I wish I would have snuck a bite from her, but it wouldn’t have been fair since being a vegetarian she couldn’t have a bite of my burger!

The cost of our mains, a side between us, a pint of real ale and a coca cola was around £30 so basically what you’d expect to pay really. It was definitely worth it anyway.

Aside from minor annoyances like kids running around, and the waitress not knowing the menu, it was a thoroughly enjoyable meal and I will certainly return here if the opportunity arises!