Beats: Album of the Month – August

If you follow me on twitter or read my ramblings on this here blog, you would’ve seen that I did a Beer of the Month post. It was a difficult decision to make.

You may also notice if you follow me on twitter that I listen to A LOT of different music; I think I got something like 30 new albums in August alone which is ridiculous. You’d think with that much new music, picking an album of the month would be difficult, right? Wrong. This was a simple choice.

So, which band wins the almighty honour of Booze, Beats & Bites’ first ever album of the month?

The award goes to…

Kaipa is a Swedish progressive rock band that formed in 1973 and they’ve become gained a massive cult following from fans of progressive rock, and despite a lengthy break between 1982 and 2002, they have still managed to keep those fans interested and begging for more music. Nobody was expecting them to return but thank fuck they did! 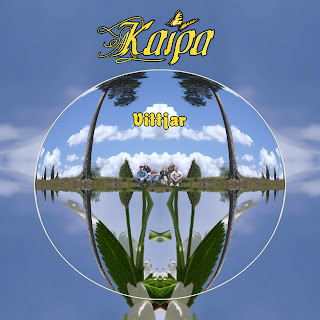 Vittjar is a masterpiece like nothing you’ve heard. From the opening pipes of First Distraction that reminds me of snowy mountains in Sweden, which then builds up with some light drumming and some quite epic but short bursts of heavy guitarwork, this intro really sets the tone for the rest of the album album.

We then get to the second track, Lightblue and Green, which is my favourite song on the album. It’s classic prog. Synth – check, pipes – check, folky guitars – check, a bassline that resonates throughout the song – check, lyrics about time and memories – check  and… Patrik Lundström on vocals! This guy has always been one of my favourite progressive rock vocalists, ever since I got into Ritual a fair few years back. It’s a great song and just has that heavy edge to balance out the synth and folkiness.

Song 3 on the album is Our Silent Ballroom Band and places Aleena Gibson, the female vocalist firmly in the spotlight and wow; what a singer! Her vocals really pair well with the folky progressive rock style that Kaipa are bringing to the world.

The album gets even more interesting with the Swedish sung Vittjar which sounds incredibly epic. I just wish I could understand Swedish so I knew what the lyrics were saying! I really love the Swedish language, though. We’ve then got Treasure House which is a real twist to the album as it seems to be very reggae inspired yet still keeping in line with Kaipa’s classic prog rock vibe.

The album continues with a whole spectrum of different genres but it forever has the classic progressive vibe of Kaipa.

All in all, well, this is my album of the month. I absolutely love it. It seems that they’ve decided to showcase all of the genres they love, but without straying from the wonderful progressive rock!

Kaipa – Vittjar is out now on Inside Out Records and is available as a 180g 2 LP Gatefold Vinyl (+ album on CD) & Ltd. Ed. Digipak.

Check out KAIPA: Vittjar - An Introduction To The Album below: