Trollfest describe themselves as a True Norwegian Balkan Metal band, which, on listening is folk metal. I think they’re just taking the piss out of the utterly ridiculous sub-genres that bands seem to create these days which is completely cool with me because some of these new-fangled genre names are quite absurd. 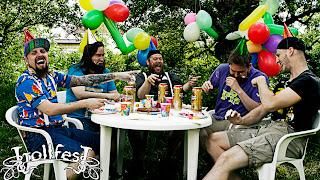 Hell, I can imagine the first time someone released a folk metal album they got quite a reaction!

Anyway, Trollfest are a folk metal band that doesn’t take themselves too seriously. The lyrics of each album are centered around a troll universe and the new album continues this theme by introducing a new character whose name is that of the album title. Brumblebassen is the village beekeeper who gathers honey for the mead.


The album starts with Brumblebassen, some nice folky strings and the sound of a buzzing bee before it leaps into the fast, heavy folk metal. It’s fast, heavy and aggressive with bees buzzing in the background, it’s not aggressive like some folk metal, it’s quite a different kind of aggression because it’s fun! The next song, Böse Tivoli, starts with a more polka sound before the speedy, more metal part comes in. It’s catchy and I can imagine that if I could speak Norwegian, I’d be singing along! 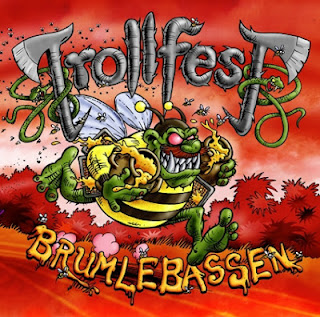 The single, Illsint comes next and it’s quite a bit different. We’ve got the fast and heavy metal and vocals that we’ve come to expect, but the folkiness in the background is more Mediterranean which is certainly an interesting turn of events!

We then get to a rather polka style interlude and what I believe is Brumblebassen speaking along with some singing of the village locals. Nicely breaks the album up! Kind of makes me want to dance and I never want to dance. It leads nicely into Finsken Norsken og presten which is probably my favourite track on the album because it has jazz saxophones and some of the “oooh” chanting makes it sound almost like this is being performed live in the village. I wish I was there.

An interestingly hilarious track worth noting is Sellout which is the penultimate song and I’m hearing it as a piss take of modern pop music, intertwined with, you guessed it, their own hilariously fun and exciting brand of Folk Metal.

Having listened to Trollfest’s previous album I knew exactly what to expect and once again, they haven’t let me down. They’re a good, fun folk metal band which is exactly what’s required. Forget the deep, dark lyrics of death and black metal; we’ve got a wonderful story depicting a mean looking beekeeper and life in a village of trolls. What more could you want?