Ever since I first read about Californian brewery Russian River’s beer Pliny The Elder I wanted to try it. I didn’t think I’d ever get the chance unless I were to go to California where even it its home state, it can be hard to come across.

And then yesterday happened. I took a day trip to London to hang out and drink beer with Matt & Karen who run the Evening Star pub in Brighton. They have recently returned from a holiday in America and told me that they had a bottle of beer for me. I was hoping it was Pliny but I thought “No, surely it can’t be...” and it was. When Karen handed me the bottle, I had to contain my girly screams as we were in a public place. It’s possibly the best present you can give a beer geek!

Last night after I left Matt & Karen, I headed into Camden to meet Mr Matt Curtis for a couple of pints in The Black Heart. Upon entering, the bouncers insisted they needed to search my bag for alcohol. In my bag was this bottle of Pliny. I almost had a heart attack when the bouncer put it behind the bar to keep for when I leave. I was so worried that they might accidentally sell it or when I were to go and claim it be asked “Erm... what beer?” it’s alright though, I got it back.

Anyway, this beer has A LOT of hype and as a rule I generally listen to Chuck D and don’t believe it but this is different. Thousands of beer geeks can’t be wrong, surely?

So... does it live up to the hype surrounding it? 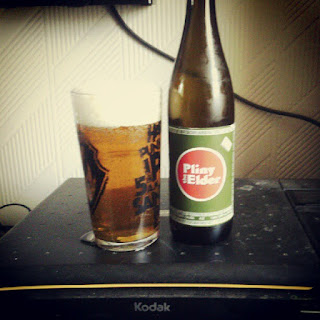 Look:
As you can see from the picture, it’s a dark amber with an incredibly lively head. The head dies down after a while and just seems to settle.

Aroma:
Pliny smells piney, a lot of spruce going on with some grapefruit and a bit of mango.

Taste:
Floral hops, grapefruit and pine with some caramel maltiness that really is required to tone down the hop bitterness. It’s so well balanced for an 8% beer. You really can’t taste the alcohol in it.

Nate Dawg’s Verdict:
Fucking hell. Seriously. Y’know that hype I was talking about? Well you need to defy Chuck D on this occasion and believe it. It would be so easy to drink this all day because you don’t notice the ABV at all. You’d probably fall over and die though, so I don’t encourage doing so. I am flabbergasted and I don’t use that word lightly. I mean, you know I’m a massive hop head. This is the ultimate beer for people like me. If you ever get the chance to try it, you need to. It is a necessary beer. Please, give me more!

Massive thanks to Matt & Karen for bringing this back for me, I owe you 50 million beers. You absolute legends.