When I first saw the name Mutiny On The Bounty, I was expecting some kind of Pirate Metal band; naturally, but reading the press release informs me that Mutiny On The Bounty are in fact a progressive metal band so I got quite excited. You all know by now how much I am in love with prog right now. Later on in the press release, however, I am told that it is in fact Technical Rock so i wasn't sure... I don't think I know of any bands that class themselves as technical rock. It intrigued me so I decided to download the attached press pack, after all, it would be rude not to... 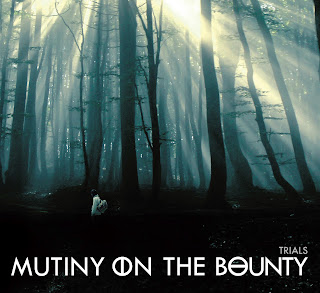 The akbum starts with a familiar synth, drum machine and piano intro which is what you'd expect from any band described as prog as it's fairly standard within the industry. It then builds up the drums and goes into amazingly furious screeching technical guitar work with a nice, steady rhythm guitar helping us on our way. Later on, that fades but soon picks up with an almost black metal sound of guitars. Right now, im just writing and the intro and the 2nd track seem to have merged into one. The old familar screeching and shredding soon returns but it all sounds a bit hollow and seems to switch between genres more than I'd like. Also, they should try picking a name that doesn't decieve me into thinking they're pirate metal.

The next track starts with what sounds like hollow, too well but trying to be produced badly, black metal/progressive metal and then the vocals kick in. What the fuck? I really wasnt expecting this judging by the music. His vocals really do not work for me at all. He sounds like he should be in a pop punk band. The weird backing vocals are shit too and it gets even worse when the vocalist tries to be more aggressive and shouty. Also, the lyrical content really does not suit his style of vocals.

Now in the next song he's trying to sound punk. The rest of the album continues with more of the same with fast as hell guitairs and heavy drumming...and vocals I just can't deal with.

My conclusion: This band does not fit into a genre, no matter what they call themselves. Musically; this album is totally awesome and the instrumental tracks are great. They're all skilled and technical instrumentalists. I do have a big fear when it comes to the music, however, i fear that a vast majority of it may be studio tricks which would be an almighty shame. Vocally? No, just no. It does not work at all. Not at all. Please, just stick to being in a pop punk band.

Maybe I'm being a bit harsh here but if you were to give this album to any progressive metal fan, they'd probably never speak to you again.

See the video for Artifacts below: