Booze: Beer of the Month – August


So, I decided it would be fun to do a beer of the month and album of the month blogpost every month. The issue is that I’ve found it incredibly fucking difficult because I drink so many beers and listen to so much music.

So, who wins the honour of Booze, Beats & Bites’ first ever beer of the month?

The award goes to... 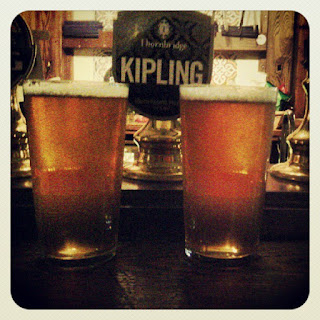 Up until recently, the only Thornbridge beer you’d ever see in Norwich was Jaipur. I fucking love Jaipur but Thornbridge is a great brewery and they have a lot of beers so it’s odd that we don’t see much here, being the City of Ale and all!

So I was on a bit of a session with my good buddy Stu (you might remember him from another blog post) and after a few in The Belgian Monk, we decided to go in the Reindeer (a pub that you would’ve seen me tweeting about/from). I noticed that Kipling was on so it had to happen.

It’s wonderfully golden with a nice, solid head. The aroma is a thing of beauty and makes you just want to sniff it all night. Wonderful citrus fruits with some grassiness in the background.

If you ever see this beer, buy it. It’s hoppilicious.