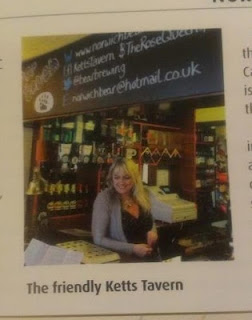 It has come to my attention that CAMRA are being twats (again). It’s even worse this time as they’re being twats about a friend’s brewery.

It’s great news that Ketts Tavern which is run by owners of Norwich Bear Brewing Co, Dawn and Kev, is in the good beer guide. I mean really good news. Both Ketts Tavern and The Rose are wonderful pubs that you should definitely go to if you ever visit Norwich. They’re run by friendly people who are passionate about beer and have great bar staff too. They have pool tables and show Norwich games which are always good features. Oh and they have beer from Norwich Bear Brewing Co.

So yeah, about the beer… which is the topic of this post and why I am angry at CAMRA.

Yes, Carlos at Norfolk Square has been contracted to brew for Dawn and Kev whilst they await delivery of their brewing equipment which will be in the back room of The Rose. The brewery is owned by Dawn and Kev and other than brewing, Carlos has absolutely no involvement. All of the recipes, branding and ideas come directly from Dawn and Kev.

*EDIT* I was wrong. I want to apologise to Carlos Branquinho of Norfolk Square Brewery. He has informed me that Dawn and Kev just give him a general description of what they want the beer to be like and he designs and brews it. It was completely my thinking that the recipes were designed by Dawn & Kev of Norwich Bear. *EDIT*

Apart from the occasional seasonal beers I’ve missed, I am confident in saying that I’ve had all of the beers that both Norfolk Square and Norwich Bear have and they are not alike. Not even close. Well… aside from the fact that they’re both beer.

Oh add to the fact that Norfolk Square don’t cask their beers… they’re bottle only.

I’m not saying there’s anything wrong with what Carlos is doing with his beers, he’s clearly a talented brewer and he’s brewing great beers for BOTH COMPLETELY DIFFERENT BREWERIES. CAMRA seem to be completely fucking blind.

Apparently CAMRA Norwich & Norfolk refuse to acknowledge the fact that Norwich Bear is a brewery because they’re contracting and currently don’t have their own brewery which is why you previously wouldn’t have seen their beers at any official CAMRA festivals. Their brewery is on the way and they wanted to start before that came, why is that an issue? I mean, CAMRA Norwich and Norfolk had Mikkeller on the international bar at last year’s festival and he doesn’t own a brewer… in a similar fashion to the old cask Vs keg debate, there are always different rules for international beers and it takes the fucking piss.

What CAMRA have said about Norwich bear is completely unfair, libellous and in fact could be damaging to business especially if someone had drank Norfolk Square beers before and not liked them or had heard that Norfolk Square beers are bad from someone else. It’s slander. They may not currently own a brewery but they are a brewing company that [contract] brews some tasty beers that they will be brewing themselves VERY SOON. Why can’t CAMRA just leave it at the fact that they’re brewing some awesome cask ales?

It takes the fucking piss.

CAMRA can fuck off.