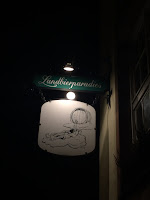 We arrived in Nuremberg on Monday night at around 6:30pm and jumped on the U2 to Hauptbahnhof, which was surprisingly quick compared to where airports are located in every other city I've been to, before switching onto the U1 to Frankenstraße. From there it was only a 15 minute walk to our hotel, even with a dreaded wheely suitcase in tow. After chilling for a while we decided to head to a local bar in search of food and beer.

Landbierparadies has about 3 bars and a bottle shop dotted around Nuremberg, but the one closest to us was the one on Sterzinger Strasse, only a 20 minute walk away. This small chain is unique in that it is 100% local from the beer, to the food menu to even the soft drinks. The other thing that makes it unique is that the only beer served "vom fass" or rather, on draught, is a frequently changing local Franconian beer, directly from the wooden barrel. 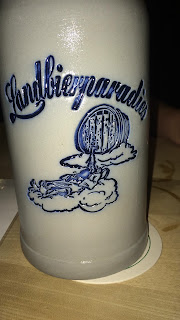 We found the bar on a housing estate, with great ease and walked in. It's essentially within a house, below some apartments, with a small bar and several large rooms. We took our seats at a table and after attempting to speak German, the lady soon clocked that we're English and handed us an English menu. It's trying that counts, right?

We instantly knew what we wanted to drink - a litre of the local beer, served in an actual stein! The beer in question was Schübel Bräu Pressecker Drachenseidla, a crisp and refreshing 4% Landier/Kellerbier with hints of the oak coming through and it was the perfect start to what was going to be a very beery week.


We then took at look at the food menu and both ordered the Schnitzel; when it came out, we were astounded at how large the portions were! Massive, freshly deep fried, crispy pork with delicious potato salad which was unlike anything we get over here. The potato salad was so fresh and creamy which perfectly cut through the greasy pork.

With our litres of beer finished, we moved on to some of the local bottles. 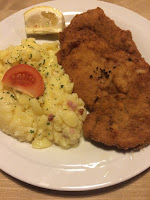 I went for Brauerei Ott Edel-Pils aus dem Leinleitertal which is everything you expect and hope for in a German Pils - crisp. herbal and refreshing, whilst Sammie went for the wonderfully smokey Weiherer Rauch, a beer that much to my surprise I had drunk before.

Since I'm a bit of a Weissbier fiend I decided to try Pfister Öko-Weissbier which again was delicious as it wasn't as sweet as many of the more commonly found Weissbiers and there was a large dose of fruity floral hops. This time, with Sammie being the dark beer fiend that she is, went for Schwarze Anna by Brauerei Neder and was a great example of a schwarzbier, being as dark and roasty as it was refreshing. 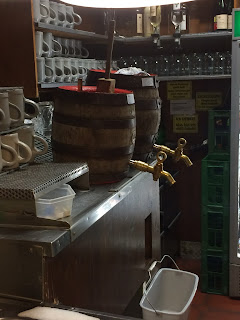 It was getting towards midnight now and we could see that the staff were gearing up for their usual 1am close, so whilst chatting to the guy who was serving us we decided to sneak in one last beer of the night. I went for Huppendorfer Vollbier which was slightly more earthy that the previous beers I'd had that night, and wasn't a massive fan, whilst Sammie decided on the Nankendorfer Landbier which I actually preferred as it took me back to the first beer I'd had that night.

We had such a pleasant night at Landbierparadies as the food and beer were both perfect, the bar was unique and had charm and despite us struggling with German and some of the staff struggling with English, the hospitality was great and we had some good chats.

We both left happy, full, a little tipsy and in agreement that we would have to visit again before the end of our trip.

We didn't manage to get to any of the other branches in the chain but I'm going to assume that they're just as awesome.

You can find out more about their bars and online shop on their website: http://www.landbierparadies.com/
Beer food German Beer Holiday Landbierparadies Nuremberg Review Travel