By Nate - October 26, 2016
Awake slightly later than planned, with a slight hangover we eventually made it to the 9:30am train to Ceske Budjovice. Train tickets are cheap in the Czech Republic - we each bought an unlimited all day ticket on the entire Czech rail network which cost around £18 each. 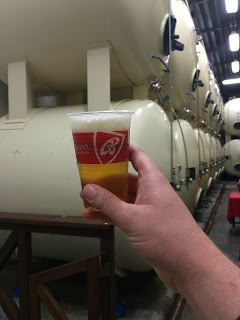 Trains in CZ are clean, spacious and efficient; in fact I believe we got to Ceske Budjovice early.

We arrived and Google Maps wasn't being much help with public transport so we just decided to take the half hour walk to the brewery on the outskirts of the city.

We arrived and met Jan who has been working for the brewery for 42 years; he used to work in the lab but he's retired now and just does tours, which seems like a nice job. Now, a little bit of disclosure here - We didn't pay for our tour; we got a private tour for blogging purposes after I started chatting to the Budvar UK twitter account.


The scale of the Budvar Brewery was incredible and I've never really seen anything like it aside from maybe Pilsner Urquell last year. Jan explained the history of the brewery, showed us the massive maturation tanks, the fermenters, the brewhouse and the bottling plant.

Some of my favourite facts from the tour: 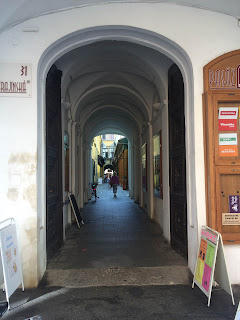 My favourite part of the tour was being given unfiltered, unpasteurised Budvar directly from the maturation tanks. We each ended up having 4 glasses (well, plastic cups) which is 3 more than on a regular tour. Jan said "You've got two hands, and therefore you need two beers" and who was I to refuse.

After the tour we were led to the restaurant where they'd booked us a table. I started by drinking the Krausened Lager which is unfiltered and so fresh, crisp, slightly creamy and just delicious whilst Sammie went for the Tmavy because as mentioned before, she's a dark beer fiend. We then ordered some food - I went for a classic bavarian (sorry) dish of roast pork, cabbage, potato dumplings and cabbage which was delicious, before having another couple of beers - The Classic and the Original. We were going to have another beer but decided to head off. 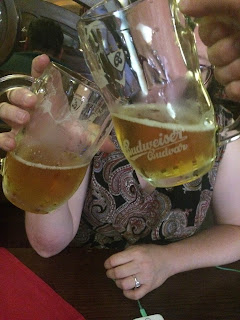 On a hot day it was nice to wander down the street with brewery fresh cans of Budvar. We had a look in a shopping mall which was a bit odd. It was like it was built in the communist era, still functional yet still not complete.

We then found our way through the beautiful pastel buildings to Minipivovar Krajinska 27 where we settled down for a bit. I just wanted the 12 Degree Lager which was mighty refreshing whilst Sammie decided on the tasting flight of 6 beers. I've got to say, I wish I would have gone for a pint of their IPA as it was the most delicious on the board. We bought two bottles of the 27 Degree Special Doppelbock to take home and went on our way.

We wandered through the streets and eventually stopped at another little Budvar place for a couple more pints of Krausened Lager before getting the train back to Prague for more shenanigans...

Whilst we're on the subject, Budvar has just launched a new website called Czech Stories which is Budvar's guide to the Czech Republic which is full of wonderful stories and videos: http://czechstories.com/

Disclaimer: Budvar UK invited me to the brewery for a tour and paid for our lunch and beers. I can guarantee that freebies did not affect my opinion because I have enjoyed drinking Budvar for years. The rest of the trip was paid for by Sammie and simultaneously this does not affect my opinion of her.
budvar Ceske Budejovice czech beer czech republic Lager