By Nate - October 28, 2016
After a sleep in our private cabin on the train, we finally arrived back in Prague; thankfully not having a similar situation as we did in Germany where we woke up after our destination.

It was a Tuesday evening so of course we decided to continue drinking because what else even is there to do?

We decided to head to the one place that everyone bangs on about... Zly Casy which was quite a way away. It's a massive 45 tap craft beer bar spread over 3 floors and really does have something for everyone. 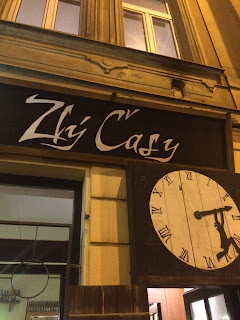 The first thing I noticed when I went in was that they had Magic Rock Rapture on tap but that's not what I was there for...

The one beer I REALLY wanted was a beer I had last time I was in Prague Matuska Raptor IPA and goddamn, I found it and it was glorious. Definitely a rival to any UK or US brewed American IPA. Juicy as fuck. I honestly could not tell you what Sammie had as I clearly didn't check into it on Untappd.

We then decided to check out the other two bars below... the middle one was full and looked more like it was table service focused but the bottom one allowed us to perch at the bar and take in our surroundings. It was brilliant, with empty beer bottles lining the shelves and walls including basically every Brewdog bottle that had ever existed.

I had Uneticke Pivo 12 Degree, a beer that people had told me about and it was a delicious, typically Czech, grassy lager with a bit of fruitiness. Sammie obviously had to find an Imperial Stout which was from FALK:ON Brewery; it was dark, chocolatey, full of coffee and red berries. Loved it.

It was getting quite late and Sammie was drunk/tired but I was pretty amped still so I ambled along for another couple of Staropramens at Pivnice U Mejly which I'd fallen in love with over the course of the week before heading to the hotel for some much needed rest.