By Nate - March 29, 2017
About six months ago I received a press release announcing the return of Bud Light to British stores and pubs, a move which I thought odd but then figured "well, OK then, if you must".

I recall posting some kind of sarcastic tweet along the lines of "GREAT! I'll finally be able to drink Bud Light!" but others were more aggressive about what is an entirely odd and what I saw as unnecessary move.

The more I thought about it, the more I realised that it may actually be necessary. 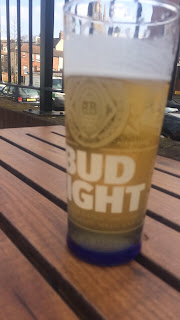 In shops, with the aside of the ever more elusive Skol and several Own Brand Supermarket lagers I don't think there really are many sub-4% lager brands, other than a few alcohol free beers and a couple that hover around 2-2.5% which many would describe as far too weak. The same basically goes in pubs... there are not really any lagers below 4%.

Therefore, the re-introduction of Bud Light to the UK Market could actually be a saviour due to it only weighing in at 3.5%.

After hearing that every Wetherspoons in the UK was planning on stocking it on draught for a measley £1.99 a pint, I obviously had to put on my investigative hat and check it out and here's what I found:

It's bland but not unpleasant. It's inoffensive. It has that hint of sweetcorn that you'd expect. It has no bitterness at all. It has no body making it ridiculously chuggable. The carbonation was low and spritely.

It was refreshing on a hot day.

It wasn't really like any of the other lagers stocked, which seems weird to say. It wasn't like Budweiser, Coors Light or 1664.

It's a beer I could happily drink and it's a beer that could become successful if only because it's possibly the cheapest beer you'll find on tap in any city. Granted this is only 'Spoons, but still.

See, beer geeks moan and whine about the introduction of yet another bland mainstream product because "why don't they drink craft lager instead?" well, the thing is, Ol' Crafty McCraftface, not everyone wants to spend even £3.40 on Adnams Dry Hopped Lager.

It's going to sit there, where people who either don't care or do care and want to drink a low ABV or low calorie beer.

It's just a little lager by a big brand.