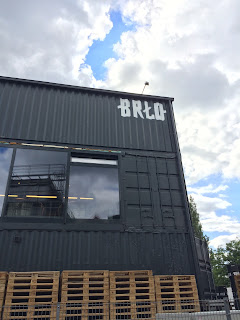 BRLO is a small craft brewery located in 38 shipping containers not far from the centre of Berlin. They brew a range of beers similar to what craft breweries in the UK & the USA are brewing such as IPAs and Pale Ales as well as more traditionally German beers such as Helles and Berliner Weisse.

I first discovered BRLO Pale late one night in Kaschk in Berlin last August and I fell in love; it was definitely one of the best beers I had of that trip so we knew we had to visit the brewery bar when we were in Berlin last month.

We discovered just before we went that our visit would coincide with their Brwfest celebration - a mini craft beer festival where they'd invite some of the breweries they're friends with to come and pour their own beers in the yard of their Brwhouse. They'd invited 11 of their friends - 9 of which from various countries in Europe including my friends 40ft in the UK, Edge from Barcelona and White Hag in Ireland as well as three new German breweries - and had various street food and music things going on. 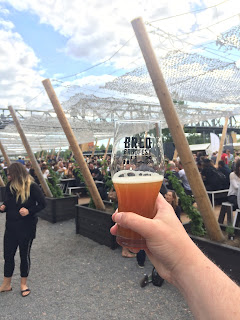 As y'all know, I'm a beer festival skeptic but since we were in Berlin and planning on heading to BRLO at some point anyway we thought we'd check it out along with Canadian Chris.

The most important thing that struck me when we first got there is that despite there being a craft beer festival going on within the confines of the brewery, you could still just go there and drink BRLO beer from their own bars as you would on any given day. Whenever I've seen similar events at UK breweries, regular drinkers who don't want to take part in the festivals have to elsewhere. I absolutely loved this approach that doesn't exclude regulars who just want pints of BRLO beer.

For those who wanted to get involved, you'd pay €5 for a special festival glass which includes a token for a 300ml pour from the hosts BRLO and having that glass allows you visit any of the craft breweries who were pouring at the festival. Prices were good, typically being €1, €2 or €3 depending on the size of pour you wanted... yes, it was possible to get a full grown up glass of beer at a craft beer festival! 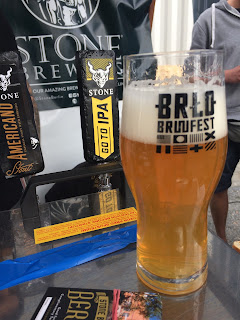 I started by cashing in my BRLO token straight away and had their German IPA which was a dark and chewy caramel based IPA with plenty of tropical fruits going on in the background. Very enjoyable and somewhat of an English/American IPA cross.

Next we dashed across to White Hag an Irish brewery whose beers I've enjoyed before both in Dublin and Munich to try their Little Fawn session IPA that The Beer Nut had previously said I need to try, and it was a nice and light IPA. I could have had several, alas there were more beers to try including Edge Gose Margarita that Sammie got a goddamn it, it was like if a margarita and a beer were to bang and have a beautiful baby.

We popped to the bar next door to see 40ft Brewery from Dalston where Tanya whom I'd briefly met before at 40ft's Technoberfest last October. We chatted about our love for the London beer scene and how Braumeister Ben is a legend and she kindly gave us a free beer! I went for the Pale Ale which I'd not had before and it was fruity with a solid malt base whilst Sammie went for Larger, an awesome German style lager that I've previously drank loads of. Sammie wasn't really feeling lager so I finished hers, with great pleasure. 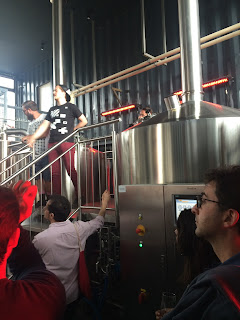 Next we dashed back across the other side, trying to avoid getting hit by kids playing cornhole (they beat Chris) and I went to the Stone Berlin bar and had a large glass of the Go To IPA, another session IPA that I absolutely love. Sammie berated me for my boring choice of beer because I drink it all the time. Sammie was slightly more interesting and went for Motel Beer Purple Noon, a grisette which is a lesser seen beer style. It was spicy, fruity and a little funky. Very enjoyable!

We then noticed a sign saying we were at the meeting point for brewery tours and it was the right time so we figured it'd be nice to see the brewery. The lovely Devin (whom we'd met before at BKL) turned up along with other people who wanted to join the tour, whilst he had to make the decision of whether the tour was going to be in English or German! Luckily everyone in the group could at least understand English so we went along with the tour. See, they say that once you've seen one brewery you've seen them all but it's not about that. It's about meeting the people and hearing the story. Besides, it was a bloody beautiful brewhouse! Devin was funny and engaging and a great host!

Near the end of the tour we got to try a brand new beer that was almost ready to come out which was a pale ale with tea, and it was absolutely delicious. 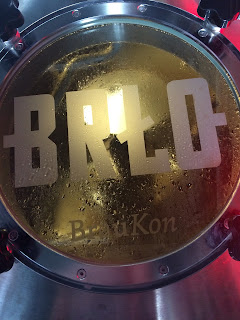 Yet another IPA for me, Kinn Vestkyst (which I'm assuming means West Coast in Norwegian) and it was one of the beers of the day... as juicy as you'd want from the style. Then out of nowhere OH MY GOD SAMMIE IS STILL ON THE SOUR. Back to Ireland for this one... The Puca Dry Hopped Lemon Sour from White Hag was lemony and acidic and delicious.

Just one more beer to finish our trip and I went Spanish with Ziggy a session IPA from Barcelona's Edge Brewing. It was soft and citrusy and basically the youngest brother of their DIPA i'd had before. I don't even need to tell you that Sammie drank Kennedy a berliner weisse from Schneeeule which again was ridiculously sour!

By this point we'd drunk loads of delicious beers so it was time to head off for some food. We toyed with the idea of going back but we were knackered and went back to our hotel.

It was genuinely the best craft beer festival I have ever been to and if they do it again in 2018, I can guarantee we'll be back!

Thanks for an awesome day, BRLO!