By NateDawg27 - August 11, 2019
I love Pulled Pork as it's a versatile food stuff that you can cook and get plenty of meals out of, whether you're going to eat some now and take some to work the next day or freeze it for a rainy day.

I also love Chinese food, but I'd never thought about Chinese Pulled Pork until someone invited me to their house for lunch one day a little over a year ago, and fell in love with the Chinese Pulled Pork they cooked so I had to steal the recipe from him and make it myself.

Since then, I've probably made it about 5 times and each time people tell me how delicious it is and how the want the recipe but y'all know me, I'm slack at getting on my blog sometimes but here it is... my recipe for Chinese Pulled Pork:

Ingredients (some amounts may not be exact as that's how I roll): 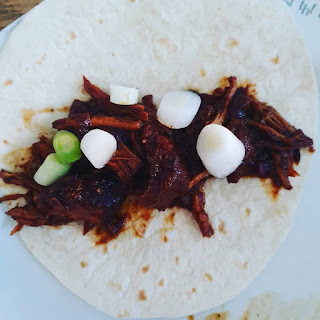 1kg Pork Shoulder (rind trimmed off)
1 jar of Lee Kum Hoisin Sauce (from an Asian supermarket as I'm convinced it's better than the same brand you get in the supermarket)
Half a bottle of Light Soy Sauce
Half a bottle of Dark Soy Sauce
About a third of a tub of Chinese Five Spice
A dash of Basil
A few teaspoons of smoked Paprika
Black Pepper
Couple of teaspoons of brown sugar or honey
A few cloves of Garlic (or lazy garlic or garlic powder. It's your call)
Chili Flakes to taste (optional, depending on how you like your spice)
A bit of Water

Sear the pork on all sides so it's a bit cooked then stick in the slow cooker with everything on the above list on low for about 6 - 8 hours and top up with water to about an inch or two below the top of the pork... you want it liquidy but not too wet.

Once cooked, shred and serve!

I mean that's pretty much it so this is basically an ingredients list. It's my first time sharing a recipe, alright?


We usually serve the pulled pork in little soft tacos with green beans that have been cooked in some of the pulled pork sauce so they're still crunchy, but cooked, as well as some sliced spring onions.

Another suggestion, which is usually night two of pulled pork is either serving it with Egg Fried Rice (cook rice the night before, let go cold but lay flat so it doesn't clump. Scramble eggs in a wok with sesame oil then add rice, bit of chopped onion, some defrosted frozen veg and just wok with a bit of soy sauce and a dash of rice wine vinegar) or with noodles (you don't really need to do much with the noodles other than get ready to wok noodles, cook in sesame oil again with onions and a bit of soy sauce. I've got another noodle dish to share soon).

And honestly, that's pretty much it! I hope you enjoy cooking and eating it as much as I do, and don't forget to tag me on Twitter (@NateDawg27) or Instagram (BeeryNate) with photos. Also, if you like it please share both the food and the recipe with my friends.