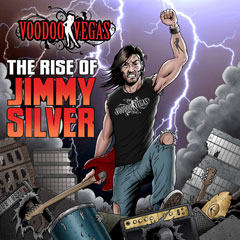 Back in 2009, I lived in Bournemouth for a few months and I was working at the Abbey Lodge hotel which had a live music venue called Champions attached to it. Occasionally I’d be lucky enough to work in the bar which meant I got to see some awesome live rock and metal music. Voodoo Vegas were one of the bands that played quite a few times and I remember enjoying them a lot.

Fast forward to the tail end of 2012 and I got a press release in my inbox, telling me that they’re finally releasing an album called The Rise of Jimmy Silver in 2013 and I was excited. I just had to hear the album!

The album starts with what sounds like a panther screeching then goes into futuristic noises before King Without A Crown kicks in and you can tell that this band are tight. You’ve got solid drumming merged with wonderful hard rock riffs that make you groove along with Lawrence’s great hard rock vocals singing catchy lyrics. I promise you, the chorus will be in your head for days.

The album then flows directly into Bullet and it’s as if the track hasn’t really changed but it has. Bullet isn’t quite as fast as King Without A Crown but it’s all part of what these guys do. We’ve got more catchy lyrics along with Meryl doing some mad shredding here. Again, it flows; next up we have No More which again picks up the pace of the album and showcases some insane guitar wankery.

What I Pay comes up next and it’s a rock ballad, it’s as simple as that. Acoustic guitars and a more heartfelt vocal style from Lawrence, almost sounding angry at one point. It’s a song that’s got so much emotion in the lyrics and is a great way to break up the heaviness of the album.

We really hit the blues rock influences on Ferry Song which gets you dancing along with pianos and is really fucking upbeat. In a contrast to this, what might surprise my readers is that my favourite song on the album is actually a slow one; Lost In Confusion. It’s another song that has a slow, sad melody and plenty of emotion in the vocals and lyrics.

Voodoo Vegas – The Rise of Jimmy Silver is out on the band’s own label on 4th of March and is for fans of Guns ‘n’ Roses, AC/DC, Mötley Crüe and everything in between.

Check out their new video for King Without A Crown:
Nate
http://www.twitter.com/NateDawg27
http://www.facebook.com/BoozeBeatsBites