By Unknown - March 28, 2013
Pistonhead beers are produced in the 'Brutal Brewery Workshop' by Spendrups, Sweden's largest brewery. Just from looking at the can, the image you get is of rock music and that is the correct image to see. 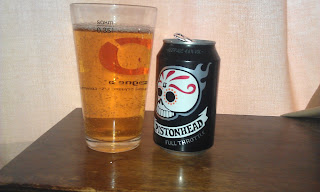 Pistonhead Laget was first launched in Sweden in 2010 before making it over to British shores last year via Proof Drinks. Since the launch, Pistonhead has developed quite a following by supporting touring bands, club nights and effective usage of social media as well as being on sale in some well respected music venues.

I really like the branding and the idea that it is a rock 'n' roll live music beer. The sugar skull on the can is incredibly eye catching and ties in well with the image of heavy metal so there is no doubt that it will appeal.

Golden with a small white head that disappears quite quickly.

Wet hay, pilsener malt and a nice amount of hops.

I really like this. It's very crisp and refreshing. I think the 330ml can is a great idea for music venues too as you find that by the time you get half way through a 500ml can in a packed venue, your beer is warm as fuck and horrible. I generally like smaller cans anyway. I mentioned earlier about the branding but it's worth talking about again. This is the kind of branding people want, especially for a company that's pushing into the live rock music market. It's great. All in all, it's a really fucking nice lager of which I will certainly buy!

Cheers to Claire for sending me some cans to review! It's gonna make for perfect train beer tomorrow!

Have an awesome Easter, bitches!