By Unknown - May 08, 2013
A while ago whilst browsing on The Publican's Morning Advertiser, I came across an article about this Dead Crow Bourbon Flavoured Beer from SHS Drinks who are famous for the alcopops brand WKD. This sparked a rather long discussion on Twitter (as it always does) with the lovely Melissa Cole and my good friend Jay.

Now as you may have previously seen, I'm all about reviewing this kind of weird monstrosity from evil corporations so I just had to get my hands on this. I heard that it was available in 4 packs from ASDA but I didn't really want it quite enough to warrant the trip to ASDA, nor did I want 4 bottles of it.

So this brings me to today. I was rather looking forward to the catastrophe that is tonight's episode of The Apprentice where the candidates have the task of creating a new and unique flavoured beer, so much that I went for a pint after work (actually, those things may not be connected). After my delicious pint of Golden Triangle Red Square I swung by Get A Round, arguably the best beer shop in Norwich to pick up a few takeouts and that's where I saw this for the lowly sum of £1.69. I just had to have it because it ties in nicely with The Apprentice tonight.

Anyway, enough rambling. How is the beer? 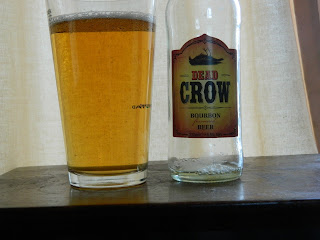 Kind of amber in colour so darker than your average mainstream lager fizzy head that dies down quickly.

Smells like very sweet marzipan and a tiny hint of your average mainstream lager. I have no issue with mainstream macro lager but marzipan can fuck right off.

It tastes like cheap... like VERY cheap 19p for 2 litres Tesco cola mixed with Foster's and sweeteners.

Yeah, you guessed it. It's fucking vile. WHY THE FUCK DO I DO THIS TO MYSELF?

Enjoy tonight's episode of The Apprentice. Who knows, they may brew better beer than this! I'd like to think so anyway...