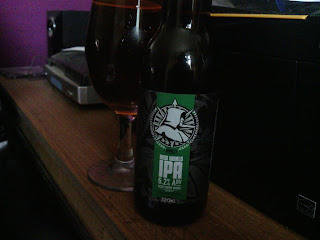 Evening, it's been a while since I've done a full on beer review instead of just brief notes from events but I feel that this is worthy... but am I?

Northern Monk BrewCo was born around six months ago and after all of the planning, they finally got around to brewing their sole launch beer: New World IPA. A lot of you probably already know David Bishop - or the Broadford Brewer as he's more commonly known. He's one of the first people I started following on twitter when I first started tweeting about beer and as a renowned beer blogger and homebrewer he has given me a lot of insight into beer. Finally, I get to taste his beer and it's not a homebrew... oh no, it's commercial.

I've been excited about Northern Monk BrewCo ever since I first heard of it. As you can see, the branding is fucking awesome... but how is the beer?

Look:
Pours translucent amber with a small quite fizzy head that disappears rather quickly.

Aroma:
Grapefruit, orange sherbet, a bit of caramel and a touch of lime.

Taste:
It starts with a soft caramel base and builds up with some pear drops, mango, sharp lime which develops into blood oranges with a some earthiness and a hugely delicious grapefruit bitterness.

Mouthfeel:
Quite carbonated but mellows out into a light waxiness.

Overall Verdict:
This is fucking awesome. I just want to sit here and nurse it all night, but I know I won't because it's tasty. It's just so well balanced and a fucking awesome first commercial release and I'm impatiently awaiting the next!

So there we have it, New World IPA is as majestic as the majestic label if not more so and paired with the majesty of Devin Townsend - Epicloud, I'm happy right now!

Thanks to Northern Monk BrewCo for sending me a bottle to review!

Catch up with them on Twitter and Facebook, and while you're here you should also take a look at their website!
#TheNorthIsComing Beer Beer Review booze IPA Northern Monk BrewCo