Last Friday I managed to get down to the Craft Beer Rising trade session at the Old Truman Brewery on Brick Lane in London. I’m sure you read my shining review of last year’s event and as many other people have dictated, this year was even better so I’m not going to repeat what they’ve all said.

I want to talk about Blue Moon, the Molson Coors owned ‘craft’ lookalike brand. OK so as many will argue, they’re not craft but fuck those guys.

Blue Moon is a Belgian style Wit, and in my opinion is quite nice. It’s highly drinkable and mighty refreshing, giving you a nice whack of orange peel, lemon and a sprinkling of coriander. I’m not ashamed to admit that I am a fan, as long as it’s not served with slice of orange floating in it.

Anyway, I’m sure you all know of it and have your own opinion which to be honest, you can keep to yourself as I’m sick of hearing everyone get all judgemental. The beer community is not meant to be like that so just stop it.

Well, the Blue Moon division of Molson Coors brought along some bottles of their other beers for everyone to sample and I want to talk about those. 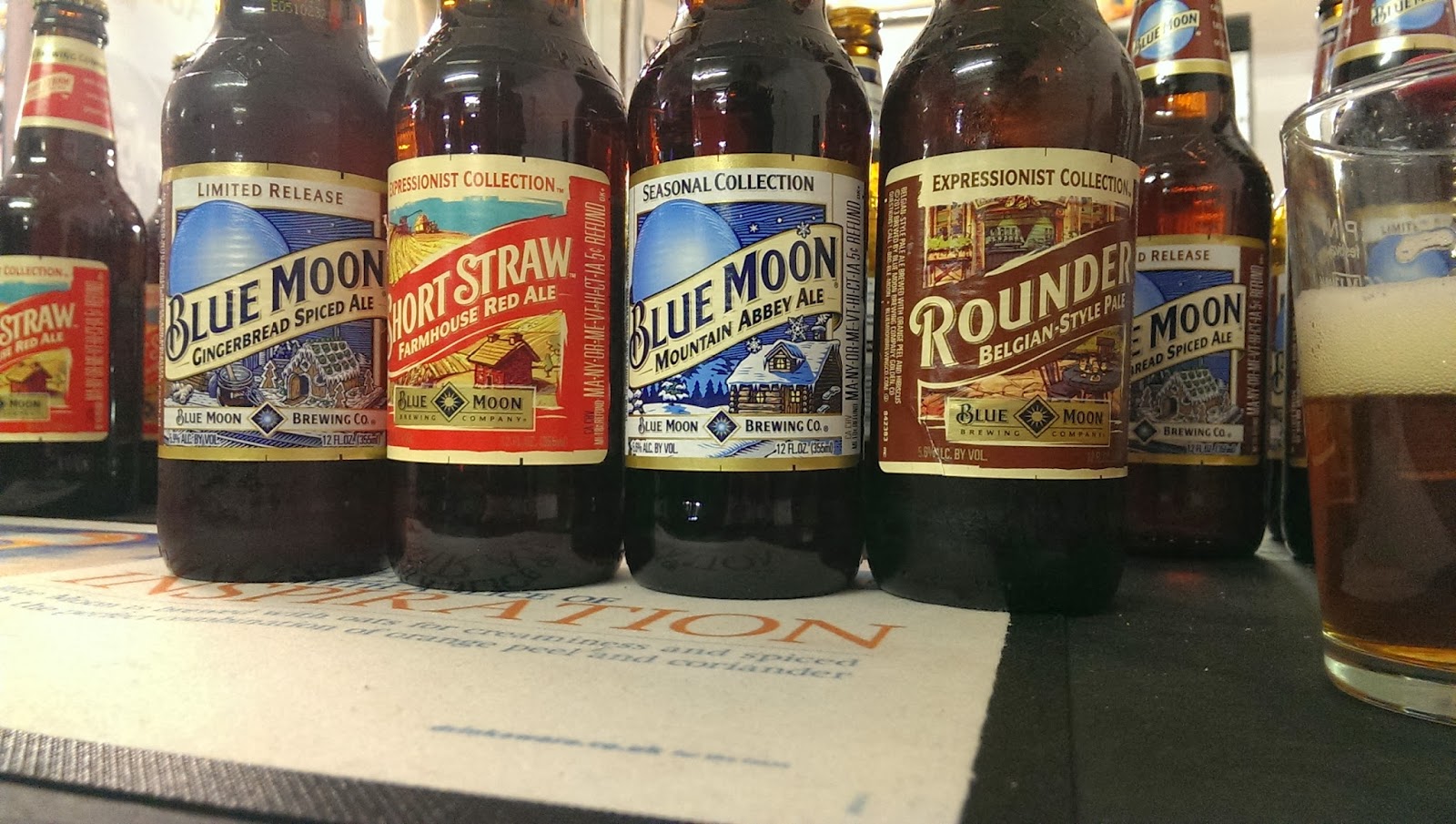 First up, I tried the Gingerbread Spiced Ale (5.8%), which I thought did exactly what it says on the bottle. It pours very orange, with a nice aroma of ginger and other spices you’d associate with Christmas as well as lots of brown sugar, and it all comes through in the taste but is very well balanced. The great thing is that it didn’t taste as sweet as the aroma dictated, so I could probably drink a fair few of these!

Rounder Belgian Ale (5.6%) was up next and proved to be my least favourite of the bunch. Both the aroma and flavour was caramel and toffee with absolutely no variation or anything interesting going on. I can understand why many people would enjoy it, but it just wasn’t for me.

I went for Mountain Abbey Ale (5.6%) next and to be honest, it wasn’t bad! Yeah, there was caramel on the nose, but it was a little more interesting with some pronounced banana and a handful of wheat. The banana and caramel really came through in the taste, but what would stop me from drinking more than a bottle is the very sweet finish.

My final beer in the Blue Moon series was Short Straw Farmhouse Red Ale (5.8%) which proved to be my favourite of the bunch. You’ve got nice red fruits and a little caramel on the nose then right at the end you can smell the funky Belgian yeast. When you take a sip, some strawberries and hibiscus are there with a dash of white pepper before you notice the slightly tart & funky yeast.

Overall, I was actually quite impressed. OK so there does seem to be a running theme with the caramel and maybe a sweetness issue but you’d expect that from a big brewing company. Really though, the beers aren’t bad. They’re not exactly the best examples of the styles they’re attempting to create but they’re perfectly drinkable.

I do have one major annoyance, however, and that is the fact that these beers are not available in the UK and they don’t have any plans to make them available to us. Yep, you read that correctly. They go to a British beer event with some beers that you can try there on the spot but you can’t buy them again if you like them, which I think is really fucking unfair on the consumer.

But still, despite bringing some interesting beers to Craft Beer Rising, I can’t imagine Blue Moon’s stall was very popular, which is sad because they have as much right to be there as Thornbridge and the like. It pains me when people won’t give a beer a chance purely because it doesn’t fit into their ideals of ‘craft’ or because the brewery is actually a big multi-national brewery.

When I first got into the beer scene, I thought it was great. I thought all of the people in it were so cool, like a tight community but in reality they’re not. While the vast majority of people I meet are lovely, they can turn into a horrible, judgemental bastard in a split second if you drink the wrong thing or do something that’s un-beer geek like and it’s increasingly frustrating.

So basically, that’s why I decided to write about my experience of Blue Moon's beers. Because I enjoyed them and because fuck you and your ‘craft’ beer.