Czeching It Out - Pilsner Urquell

By Nate - September 27, 2015
It's around midnight and I'm descending into Prague on a Wiz Air flight from Luton Airport. A blinding flash of light. A deafening bang. Not the greatest start to my 26th year on this planet, with the fear of imminent death. The air crew weren't fazed; sitting; chatting amongst themselves. You could cut the tension on the plane with a butter knife. 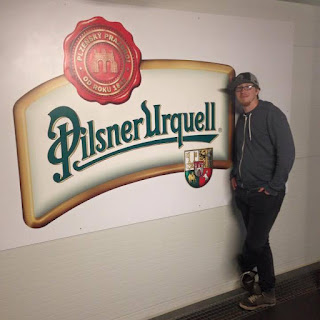 We land. We're still alive. The captain speaks, telling us we're all very lucky to have experienced something so rare as a light on the side of the plane exploding... nobody laughs.

It's pissing it down. Taxi. Get to the hotel. Apparently the room I'm in is actually around the corner. Follow the map. Drenched. Open a door. The scene in front of me with bright lights shining on a rainy courtyard reminds me of the final episode of Prison Break Season 2 when Michael goes to SONA.

Up early, walk to Tesco, breakfast. Tesco is amazing in the Czech republic, by the way. It's big. I couldn't find an umbrella. Pastry for breakfast worked. 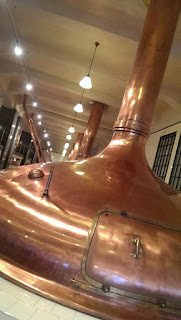 Get on the tram, find the station... I'm headed to Plzen for Pilsner Urquell. I've been a massive fan of Pilsner Urquell for years, so this was going to be a real treat, seeing a brewery on such a massive scale. An hour and a half train journey. Arrive in Plzen.

A while to go before the next tour so I grab a ticket and head to the restaurant for a few beers... indoor smoking? Wow. As a smoker, this was enjoyable for me although I can see that many people would disagree!

Pilsner Urquell Tankovna to start... fresh, crisp, a little leafy bitterness tingling on the palate. My first beer in the Czech Republic. Two pints down and it's ready for the tour.

The tour takes you through every part of the process of Urquell, and as someone who works for a brewery its things I know about beer already but I don't care... I love seeing how other breweries work. For me, the most interesting part of the actual tour was not the brewhouse but the packaging plant, as geeky as that is! The sheer size of the 3 bottling lines and one canning line was really something to behold... the amount of bottles that fly out of there every single day! 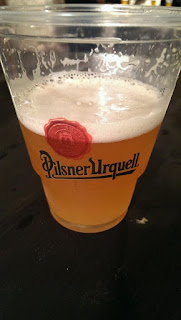 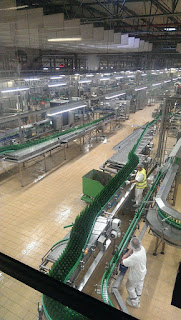 The tour ends with the most special part... getting taken into the caves to drink unfiltered, unpasteurised Pilsner Urquell from a wooden barrel. Oh shit. Fresh. The slightly rough mouthfeel, the clean yeastiness. This is a different beer; this is not the beer I know; This. Is. Lager. I drink my fair share of unfiltered lager at work but this is special, this is something I want to repeat.

Retreat to the restaurant...

Gambrinus Nefiltrovaný - 5% - nice, but I'd rather have Urquell.
Master Semi Dark - 5.3% - chewy toffee with a spattering of marmalade. Nice in small measures.
Master Tmavý 18° - 7% - big beer... chocolate coated caramel with some leafy hops. Strong.
Unfiltered Kozel - 4.9% - This wasn't the last Kozel I had that week, and it wasn't the best.

I think the Pilsner Urquell tour is a must for any beer geek and one that I think would be just as enjoyable for me the second time round.