A Day in Bamberg with Hans, Nick and Alec

By Nate - January 11, 2017
On the Friday of my recent trip to Germany with Alec and Hans, the now legendary Stick man, we decided to take a trip to Bamberg, a destination that has long been on my hit list.

Bamberg I had been told is one of the ultimate beer destinations in Germany and luckily is only 45 minutes on the train from Nuremberg (regardless of whether you get the RE or S2). We picked up our Tagesticket Plus (all regions) for €19 (for both of us, not each) and boarded the RE train at the Hauptbahnhof. 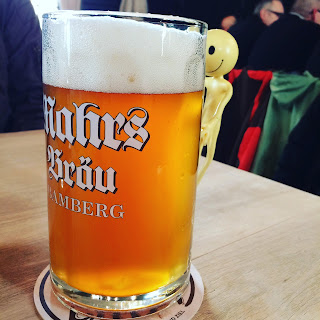 We arrived in Bamberg at around 10:45 and went in search of our first brewpub, Mahrs Brau. We followed Google Maps which seemingly took us through what looked like an industrial estate and found the pub. It was before midday yet it was already bustling with local people chatting and chugging beer, but we managed to find a seat in the back room. The beer I'd been told I needed to have here was "U" which you order by saying "Ah Ooh" so ordering "Zwei Ah Ooh" felt a bit weird being English as it's like you're ordering two of one. Fucks sake. I'm overthinking the language thing. U arrived bright orangey golden, the aroma of peppery yet leafy German hops, slightly caramel flavoured and I was in love. It was so good that we didn't even mind accidentally ordering a second.


We finished these and headed to Keesman, another Brewpub, where we bumped into Nick outside. We wandered through the Schwemme into the main, tiny little pub, and there didn't appear to be any seats so we wandered back out. We were about to order a beer from the hatch and stand in the Schwemme drinking it but Nick spotted some people leaving so we took a dive for their now empty seats. As I've mentioned before, in Germany they don't have the fear of sitting at the same table as strangers like most English people have. Alec and I had a Helles here and we both went for the Schnitzel with Potato Salad for lunch; the schnitzel I think was better than the one in Landbierparadies I had earlier in the year yet the potato salad was quite low on the list (not the worst of the weekend). After we'd finished, Nick insisted that we had to have a Bock since it's Bockbier Season so we did, despite me previously telling Nick I don't really like Bocks but it was wonderful and unlike any I've had - it wasn't as sweet, but just as boozy.

Nick sent us on our way whilst he had another beer and gave us rough directions through the picturesque surroundings of Bamberg where we were to meet him at Klosterbrau. Nick was on his bike so we figured we'd arrive at the same time, yet when we arrived he was somehow already there. Probably due to us being tourists and taking three thousand photos on the way. I liked this pub, but the beer was probably the worst of the day. The Schwarzbier was OK but not amazing; sure it was like a dark, roasty lager but had something about it, like chewing pennies. The Bockbier was better, but again not my favourite.

More walking (this time with Nick) and up some winding streets, past Random Alleys, then up a hill and we made it to Griefenklau where disappointingly the garden wasn't open so we couldn't see what Nick proclaimed has an amazing view. Ah well, I guess a house brewed Lager was on the cards whilst sitting next to an elderly German couple. Of course, they didn't speak a word of English but the lady was absolutely obsessed with Hans the stick man and engaged in conversation with Nick about what exactly Hans is. We finally determined that the German word for Mascot is quite close to English and is 'Maskottchen'. 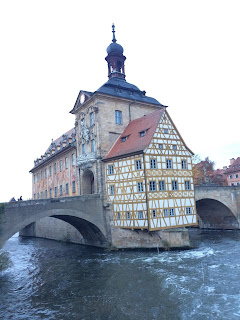 We finished our beers and headed on our way to the famous Schlenkerla which has been on my bucket list for several years and it turns out I hated the place. We had to sit in the Schwemme, which wasn't a problem, but queuing at the hatch to get a beer was annoying and having to pay like a €3 deposit for an unremarkable unbranded glass that wasn't even worthy to steal and thus forcing us to queue up for our deposit, was. That said, the Rauchbier Marzen from the wooden barrel was quite worth the effort as was seeing yet another lady get obsessed over Hans.

Next we popped into a craft beer bottle shop which was brilliant because I was finally able to buy yet more Fuller's and Greene King beer in Germany. Result!

Next pub was Spezial which I had been told was pretty good and I wasn't disappointed. It was here that we met up with Nick's friends from Nebraska and we joked and laughed and had some beers. The Rauchbier here I thought was even better than Schlenkerla, no kidding, and I could happily come back and sink several pints. I believe I also had a lager here but memory is slightly hazy.

Final Bamberg stop was a quick one in the Schwemme at Fassla and one of the best of the day if memory serves.

We got the train back to Nuremberg and wandered to the Landbierparadies on Wodenstrasse, one that I'd not been to before. We had a couple of beers and ended up discussing Brexit with a German man who was of the "Britain is full of idiots" persuasion, which we agreed with.

After that we wandered back towards the centre and stumbled upon a proper metal bar called Bela Lugosi and it was exactly what you wanted from a metal bar... dirty, full, brutal music and bottles of cheap Gruner Vollbier.

After that I was a little inebriated and passed out back at the hotel. So much beer, so little food.

Bamberg, just in that one day became one of my favourite places I've ever been to. It's beautiful, the beer is cheap and I will return... next month I reckon.