By NateDawg27 - June 27, 2017
Day 3 started much the same as any other with us moaning about hangovers before making sandwiches at the apartment before heading out.

We decided to head up to Letna Park because we'd not been there before and we'd heard it has great views over the city (also, beer gardens. 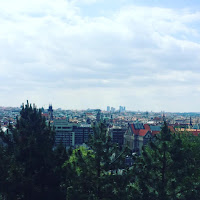 We wandered through the greenest space we'd seen in Prague, the large Letna Park and found the Metronome where there was skateboarding and the universal sign for "You wanna buy drugs, fam?" and holy shit, the view was incredible. A wide unobstructed view of the city I love in all its glory.

Afterwards we took a short wander and accidentally found a Staropramen beer garden serving Tankova at very cheap prices, about 32kc if I remember correctly. Despite it only being 11:30am of course I had to have a pint of the 10 degree (which is not the horrible stuff we get here). It was so nice sitting in the scorching sun drinking beers, chatting and smoking cigarettes. Some English girls then arrived who knew ALL ABOUT BEER, it was great because I learned that Corona is from Italy. NOT. We prevailed through their knowledgeable conversation which somehow, effortlessly switched to make-up and I have no idea how. We decided to have another pint with Sammie once again making the mistake of thinking the cider wasn't Kingswood. Obviously it was, to her disappointment. 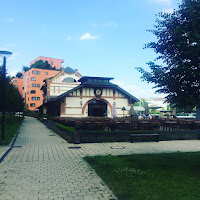 We decided to head towards The Prague Market in Holesovice with another stop at another beer garden. This one wasn't quite as nice and only had Gambrinus 10 which I actually prefer in bottles and Sammie had a bottle of Frisco which is like a blended fruit cider from the makers of Pilsner Urquell.

We finally found the market and it was wonderful. I felt like I was walking around Great Yarmouth due to the sheer amount of stalls selling genuine knock off merchandise and cheaply made everything, except there were more Vietnamese people than in GY. 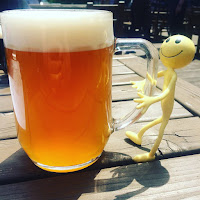 We found the food hall which was wall to wall of fresh produce. Fruit, vegetables, meats, cheeses and the freshest carp you could find... in fact it was so fresh that it was swimming around in the tank still! Next, food was on the agenda, and the only food we could find was Vietnamese, but I was OK with that! I had some curried chicken noodles which were alright, washed down with a can of Gambrinus 10 that boasted 10% extra, whilst I got lost in translation and accidentally ordered Sammie a chicken pho, but it was delicious and fresh so no complaints.

We decided to walk through the housing estates and construction sites of the very quiet Holesovice area towards Pivovar Marina which I'm sure that you don't need to know Czech to figure out that it's a small craft brewery and restaurant next to the water. The restaurant and beer garden are both massive and there's a small, probably only 5bbl brew kit behind the bar. The Holešovický ležák 12 was a delicious unfiltered lager, popping with sweetness and fresh grassy hops whilst Sammie's Marina tmavý speciál 13 was rich and chocolatey.

We got the tram into the centre next and went to another place on our hit list for the week, T-Anker which is a bar/restaurant on top of a rather brutalist looking department store. With the sun shining down on us, and the amazing view over the city it didn't even matter that their house lager was just OK. 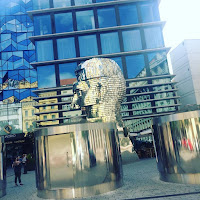 Next we were going to meet Adam, Brendon and Bellos somewhere that I would never have chosen before. A well known, misogynistic chain of American bar/restaurants. Hooters. Tankovka Pilsner Urquell and chicken wings were delicious and cheap enough but I couldn't shake the uncomfortable feeling I had being in a restaurant where the management's entire philosophy is for female waiting staff to get their boobs out.

We moved on swiftly to Craft House where we'd been the other night and was handily across the road. They'd shaken their tap list up a bit so there were fresh new beers for us to try. Hendrych H8 is a pilsner that I'd had before and was tasting as delicious as ever. Sammie's Raven Morrigan Irish Dry Stout was silky smooth, creamy and full of chocolate as a beer of the style should be. Raven is one of the best Czech craft breweries out there so I had to grab a pint of their juicy, Casquinox IPA which unsurprisingly was full of Cascade and Equinox hops whilst Sammie had been craving something sour so went for the locally brewed Zubaty Pes Kiwinator which was an uber salty and bitter Kiwi Gose.

We left the guys to their own devices and went somewhere that Sammie had seen online and we'd been recommended before, Pivovarsky Klub. We walked into an incredibly busy tiny bar since the downstairs was closed; the bar man who was doing everything by himself including drinks, glass collecting, glass washing, serving food, seating people, the works was incredible calm and collected, asked us to either come back when downstairs is open or just wait for a seat. Bars of this small size in the UK struggle with even three people on so he was doing an impressive job. Eventually he spotted two seats at the bar so reserved them for us and we jumped in. There's a small but carefully curated tap list of 6 beers, one of which I'd noticed was Benedict Světlý ležák 12 which Joe had recommended me on twitter, and holy shit it was one of the best lagers I had all week. Perfectly crisp and hoppy. Sammie went for Rebel pšeničný which is a perfect banana and clove tasting creamy hefeweizen.

It was with this, we decided to call it a night. Stopping via Tesco and sitting in Sacre Couer park with a couple of beers on the way back to our apartment as the next day was going to be boozy...