By NateDawg27 - June 23, 2017
Waking up with irresponsibly sore heads, we had some breakfast at the apartment and caught the train to Pilsen, a city of a little over 150,000 about an hour and a half on the train from Prague. 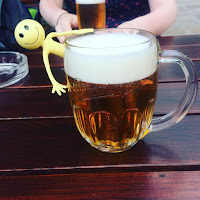 I'd been to Pilsen once before, back in 2015 to do the Pilsner Urquell brewery tour which I didn't fancy doing again so this was a trip to see the town and visit some pubs.

First stop was actually the Pilsner Urquell brewery where they were preparing for a performance art festival later that evening. As it was a nice, though somewhat blustery day, we sat outside drinking their ubiquitous beer which I'm sure I don't need to introduce by now.

After that we took a wander over the river, taking in the sights of the beautiful city and found Na Parkanu, a pub I'd heard so much about before since they sell Unfiltered Pilsner Urquell, probably the only place to do so. I'd had it once before, directly in the cellars beneath the brewery but I was underwhelmed with this and that's probably because it's a case of needing the experience more than you need the drug. Next, a poster in the pub caught my eye; it was advertising Master Summer Ale which comes from Prazdroj who make Pilsner Urquell so I went for that. It's great seeing an extremely traditional brewery making their take on a modern craft beer and it not being shit! It was exactly what I expected from a summer ale... citrusy and refreshing. Sammie went for a cider, thinking it wasn't Kingswood but much to her disappointment it was. It just tastes like Apple Tango (which I don't mind so much). 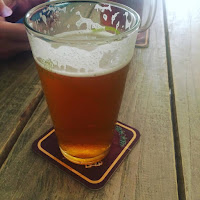 Whilst we were walking towards somewhere else, we figured it'd be hilarious to pop into the British and American sweet shop and to our entertainment found Bud Light, John Smiths and Boddingtons in the beer fridge!

After that we found another little craft beer bar and bottle shop that wasn't on my radar, Pivotecka, so it would have been rude not to stop. Lovely little hipster looking oasis where I observed a mixture of people from two guys who were clearly on a craft beer crawl, to two coders with the macbooks discussing development stuff and a guy who was slightly confused that they didn't sell Pilsner Urquell so made do with another lager. I think there were about 15 beers on tap, which was pretty astounding. I figured it was time for an IPA so I went for Zichovec 15 Degree IPA which was happily drinkable. A little hoppy but more English style. Sammie went for Hellstork Doppelcock which is a honey doppelbock. A little too sweet for my liking. Next stop was Francis, another craft beer bar which actually sold Pilsner Urquell so I had a pint to which Sammie judge me as she ordered her Zhurak Melounie Oatmeal IPA which I wish I would have had because it was rich with a thick body and a boatload of fruity hops. It actually reminded me of Siren Soundwave.

Back round the corner and we were hungry so stopped for a dirty kebab which was very delicious and wasn't the last of the trip.

Next stop was Na Cepu, another little craft beer bar where I had the Pivečka Cascade IPA as I wanted hops again. It was nice, but not exactly bursting. Sammie had some weird beer that tasted like apples. I wasn't into it. 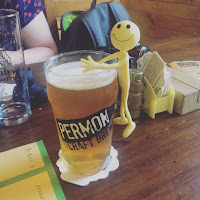 We walked towards the station and purposefully missed the next train out to go to Klub malých pivovarů which I'd heard was good, and boy I was not disappointed! 8 taps of craft from the Czech Republic's finest. I started with Kout na Šumavě 10 degree lager which was crisp and delicious whilst Sammie had Frýdlant Albrect 12 degree as she'd had the dark version the previous night and enjoyed it. I have to admit I preferred this one. We decided to have one more beer which turned out to be the best I'd had all day, and possibly the best of the trip. Permon Cryo Hop Mosiac was a punch in the face with mosaic hops, citrusy, bitter, toasty, juicy. Basically it's 100% what I want in a beer and I should have had another pint. Sammie had a bottle of Sedmy Schod because she has one of their beer mats but hadn't tried it before. I wasn't a fan; it tasted like one of those old American imports. 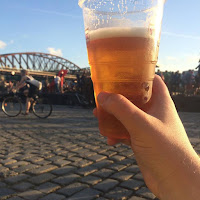 Next stop was the train station and we had some beers on the train and got off at Smichov. We wandered across the river and went to (A) Void which describes itself as a floating gallery. The atmosphere here was banging, with music and dancing which was nice considering everywhere we'd been in Pilsen was dead. We had a couple of beers here, but just relatively boring Lobkowicz lagers but remember what I said earlier about needing the experience more than the drug? Well that. We absolutely loved sitting in the scorching sun, drinking pints and listening to music.

More craft beer next as we found Kulovy Blesk where I found what I think was my only Matuska beer of the trip, their wonderfully summery and hoppy California whilst Sammie went for Bad Flash Hop Wings IPA which was equally tasty.

And that was day two, more beeriness, more cheeriness but a different city to explore.