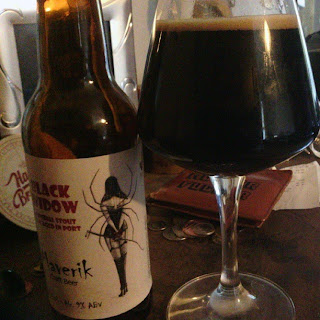 You know me, I don't usually do beer reviews. I'd rather rant about shit, but I dunno, this has impressed me enough to write.

If you've been reading this for a while, or looking at my tweets, you'll know that I haven't always said nice things about Norfolk Square brewery. I've said previously how Crazy Horse American IPA, while being nice, does not taste anywhere close to an IPA. It's more like an English Strong Ale, and Lunatik, again is nice, but not an IPA, to me it tastes more like a Belgian Tripel.

Well I've wanted to try Black Widow for a while and today I managed to buy a bottle from Harper Wells in Norwich. It's an Imperial Stout aged on Port.

Mouthfeel:
Silky smooth. This is going down too easily.

Verdict:
Well I wrote about it, didn't I? I don't usually write about individual beers. Mainly adventures, or festivals. This has really impressed me. Would definitely recommend it. The odd thing is that it doesn't taste strong for an imperial stout. Is that a good or bad thing? I don't know but I'm fucking enjoying it.