As I’m walking down pier plain in Gorleston, a couple of blocks over from the docks, on a warm Sunday evening that’s slowly getting dimmer I see the pub that I’ve been meaning to check out for a while. Emily was out cruising with her friends, like she does every Sunday night, so I thought it’d be my perfect opportunity.

I see the pub on the corner and I stop for a moment. It doesn’t look like the kind of pub I’d want to go in. It’s on a street corner and it looks beaten up, and it looks like entering will get me beaten up.

I slowly pluck up the courage to walk closer to the pub and circumvent the building to find the entrance. There is a sign pointing to the right side of the building, but there are about 5 doors. Of course, it had to be the last one.

I push the door that feels like it’s going to fall off of its hinges and walk through the tiny corridor and walk in.

It’s a weirdly narrow pub, very traditional looking, with seating around the edges, a massive mirror above the fireplace, a pool table at one end and a bar adorned with several hand pumps and keg taps.

Right off the bat I’d suggest holding your nose in this pub. As soon as I walked in I could smell the stench of stale smoke. The pub obviously hadn’t been re-carpeted or anything since god knows when. I’m a smoker, but it was vile. I almost left due to the smell, but I was meeting a friend so I couldn’t.

I walk up to the bar and notice that there are 6 real ales on hand pump including many of the usual suspects you’ll see in Norfolk, from the big breweries – Greene King IPA (the house beer, naturally), Adnams Bitter & Woodforde’s Wherry, along with the very local Lacons Pale Ale and Hop Back Summer Lightning. 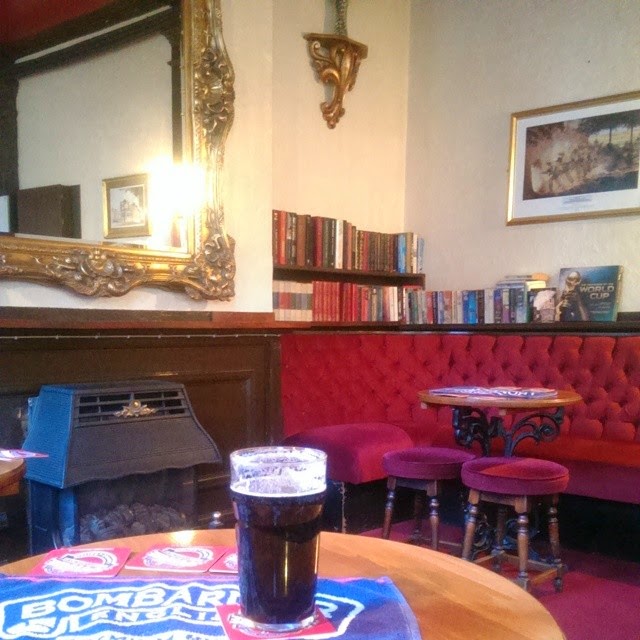 I went for Dark Star The Art of Darkness, a beer I have loved since it was first released and a beer I will always buy if I see it on cask. It’s deliciously confusing as it has all of the hops you’d expect in a pale ale, but it’s black and carries the body of a beer way above 3.5%.

There wasn’t anything to speak of on the keg taps – just your usual suspects like Foster’s, but they did have Stella Artois Black which is probably the fanciest keg beer you’ll see in that part of the county.

The bottles were fairly standard too, but on the way out I noticed they were selling bottles of Greene King Light Ale. I’ve no idea what it’s all about as I can’t seem to find much information about it, but I may try it next time.

I took a seat in an empty corner and studied my surroundings. There were a group of very drunk women attempting to play pool, another solitary chap reading the paper behind me and your obligatory locals sitting at the bar chatting to the girl behind the bar.

Just looking around, it is a very nice pub. The beers were well kept too (I had a half of Lacons Pale Ale after, and it was also delicious), completely bright and at the perfect temperature.

After a while sitting there, chatting to my buddy, I started to feel more comfortable. The smell didn’t go away, but I started to realise that I wasn’t going to get any shit from being in what looks like a very tight local pub, as I had first imagined.

It’s a great pub for what it is, a street corner boozer, and if I can put up with the smell I may return there.

This is the start of my discovery of Gorleston pubs. Since I spend a lot of time there because it’s where Emily lives, I figure I may as well report on the local watering holes.
Beer booze gorleston Local pub New Entertainer pub Real Ale