By Nate - April 21, 2016
It's been a while since I've done a proper review, mostly because I've been a dreadful person and haven't written about anything that I've automatically been sent within the last probably year-ish but this one I couldn't not review and that's mostly because the CEO of St Peter's Brewery hooked me up with samples as he's a lovely chap.

It was just a chance meeting with Steve Magnall, formerly of G****e K**g and the wonderful Thwaites Brewery, when my good friend Matt Curtis was on a whirlwind trip to Norwich in aid of City of Ale. It was in St Andrews Brewhouse, along with International Man of Triangles Kev Tweedy, my Beer Woman of the year Belinda Jennings and Francis who does PR for City of Ale, that I bumped into Steve.

We got chatting, and he mentioned they'd decided to brew a Black IPA, which was going into 330ml bottles (as it is the preferred measure these days) to which I cheekily mentioned that I am one of them beer bloggers again now and totally independent WINK WINK NUDGE NUDGE, so we exchanged business cards (he gave me his business card as I never bothered to order any. I should) and I promised to email him the next day. He then hooked me up with their marketing lady, Emily who took my address and promised to get some bottles to me. 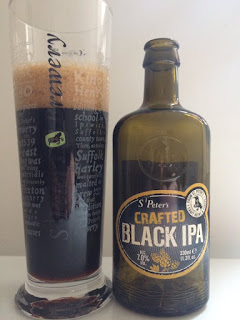 St Peters I've always found were a criminally underrated brewery. I always remember seeing the medicine style bottles of their beers on supermarket shelves and I remember drinking their beers before I was allowed to, when dad would buy us a few bottles in for Christmas. I then remember drinking their beers in The Fat Cat on cask, and recall Grapefruit being a thing of beauty (suck it modern craft breweries... St Peter's did a grapefruit beer first). For years after that, cask St Peters was few and far between and then it started cropping up again along with key kegs (which are mostly export). The most interesting thing I learned about Peters is the countries in which they sell the most beer too. Three of them, maybe four are unsurprising but the fifth shocked me to my core for the fifth is Mexico. Apparently Mexicans go nuts over their dark beers, because very few of the new craft breweries that have cropped up over there are making stouts and porters. Interesting huh?

Anyway, I'll stop waffling (can you tell I miss writing?) and get down to it... what's the beer like?

It pours black as the night with a lovely massive medium brown head; on the nose you're getting spiky citrusy hops before the chocolate and coffee notes kick in along with dark fruits.

Upon tasting, it's mostly those dark fruits you get on the nose like dates and raisins but the coffee kicks in before a sweet fig and citrusy finish. It really hides the 7% well!

Verdict? It's a very bloody good beer, but for me it's not a Black IPA. For me, in a Black IPA, those fruity, citrusy flavours should dominate but they just don't. For all intents and purposes, I'm going to view this beer as an India Stout, or Hopped Up Stout, because that's what it is.