Up bright and early on the Tuesday, Sammie and I decided to head to Munich for the day. Trains in Germany are ridiculously cheap, if you get the regional ones, but they do also take forever. The Bayern Ticket we got entitles you to unlimited travel within Bavaria and Franconia for one day for €23, and you can add other people on for an extra €5, which is a bargain, although the regional train means it stops at every single stop and thus taking around 3 hours. 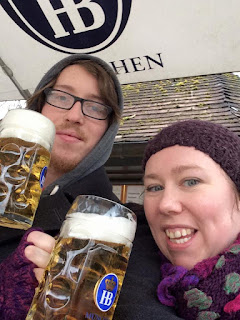 We got to Munich, and the weather wasn't very pleasant. Rain. Ugh. Our main target for pre-beer wanders was The English Gardens so we headed that way. Sammie, I may have mentioned, is really into art so we went to Haus Der Kunst (literally House of Art) which backs onto the English Gardens. We paid about €12 each to get into an exhibition of an artist whose name I forget, but this guy creates scale size dioramas and models, then shoots with a camera to make them look life sized. It was pretty cool but the best part was actually the free installation by French artiste Laure Prouvost, entitled "We would be floating away from the dirty past" which featured sculpture, video, text and every kind of art you could imagine. The whole idea was about inviting you in, being your friend, showing you some love. It was about how she would treat you if it was her museum. She'd give you raspberries and make you a cup of tea. I'm not usually encapsulated by art, but this was something special.

We then decided to take a wander through the rainy English Gardens where the surfers were out in full force on the artificial wave, in spite of the weather. We got to the Chinese Tower, which was beautiful despite the rain and ordered a half liter of Hofbrau Helles whilst admiring the scenery and deciding that it would be much more beautiful in the summer. The Helles was crisp and refreshing, and only €4, which if it was somewhere in England like the equivalent of Hyde Park it'd probably be about £6. 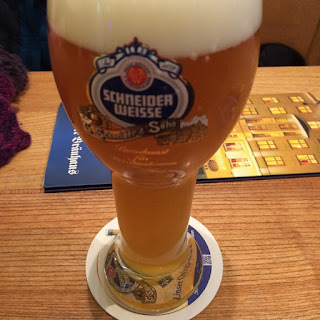 We then hopped on the tram to go to the one place that I really needed to go in Munich - (Schneider) Weisses Brauhaus. That was the dream, being a massive van of Hefeweizens. I was surprised at how easily we were able to find a seat considering it seemed like a busy day, and as it happens we were between two groups of English people, both very different groups. On one side was a couple of respectable chaps who looked like they were over on a business trip, but then there were the dreaded scousers drinking litres of lager. I knew we'd have to bump into wankers like that. They kept singing and being loud so they eventually got kicked out, much to our gratitude.

We ordered our beers - We both started with one of my all time favourites, a half litre of Tap 5 Mein Hopfenweisse, a strong hefeweizen that's been hopped to fuck. Holy shit, the freshness, the drinkability despite the ABV! I could have easily drunk this all day but there were more beers to be drunk so we decided to have one more, mine was a Unser Original and Sammie being the dark and strong beer fiend that she is, obviously went for Aventinus. 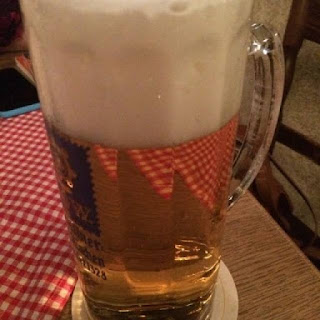 Moving on, the next pub on our hit list was Augustiner Am Platz which was quite a bit busier than Weisses and after sneakily manoeuvring the place we found a seat. First beer we ordered was Augustiner Edelstoff, a 5.6% Export Helles, and I dare say that it was ridiculously refreshing after a couple of yeast-heavy weissbiers. At this point, while waiting for my native friend Thomas, we started talking to Tim and Jen, an American couple who were sitting beside us. We got talking because I'm a nosy fucker and noticed him checking into a beer on Untappd so after hearing they were speaking English, we started chatting and exchanged Untappd usernames. We chatted beers, whilst drinking yet more beers. I went for the standard Augustiner Helles next, which is a far cry from a standard lager and I preferred this to the Edelstoff as it wasn't quite as sweet. Sammie had the Dunkel, which was too sweet for me but she loved it. I was not pacing myself so managed to sneak in another half litre of Helles before Thomas arrived. (NB. Untappd says that I actually had a pint of Dunkel too, which I don't actually remember). 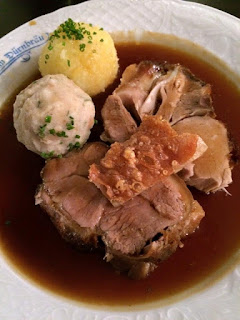 We bade Jen and Tim farewell and wandered off with Thomas to get food.

Due to having not eaten yet, I was quite drunk and therefore cannot remember the name of the pub we went to next, or what I drunk but I can tell you that I had the most delicious roast pork with dumplings that I have ever eaten in my life, after Thomas told me I wasn't allowed to order the bratwurst as you only order it before lunch, and I drank a lager. He was shocked at the fact that in the UK (or where I'm from at least) you can't walk down the road drinking a beer for fear of getting fined.

We had time for one last stop before the train, and it was a weird, posh, basement hotel bar that I think was attached to the train station or at least very near. I'm sure I had a Konig Ludwig Weissbier here.

A stumble to the train station to grab some currywurst (that I spilled down myself on the train) and a beer and we embarked on our journey back to Nuremberg.

And that's where things went wrong. Towards the end of our journey, we both fell asleep and woke up in the town just past Munich. We were in a raging fucking panic but that was all sorted because it was going back to Nuremberg to stay for the night. THANK FUCK FOR THAT!

We got back to Nuremberg and got safely back to our hotel for a rather good, but drunken night's sleep...