Brewdog Norwich - The Dream has Happened

By Nate - April 18, 2016
For years and years my beer geek friends and I have dreamt of this day; the day that anarchic Scottish brewery Brewdog open a bar in Norwich. We called for it, we crawled the streets trying to find a suitable venue for them to move into, alas no luck but finally, about 9 months ago we got the news that we were waiting for, the news that Brewdog would open up in the former Hideout/Knowhere nightclub on Queens Street in Norwich.

Friday 15th April, at Midday, Brewdog Norwich is finally opened to the public with craft beer, food and a bottledog shop.

I mean, as if the need for Brewdog Norwich wasn't enough, it has a goddamn shop with around 200 bottles... something the centre of Norwich has been crying out for, for a long time too.

I was lucky enough to be invited to a secret friends and family opening on Wednesday night, by my good friend and Brewdog barman Jay, as well as the EFP/Press Launch on Thursday night.

Walking through the door, it's the same yet different as other Brewdog bars... sure it has the exposed brickwork, but the bar is different. It's clear with no obtrusive (yet beautiful) 3 out founts and instead the 25 taps are on the back wall a la Norwich Taphouse. 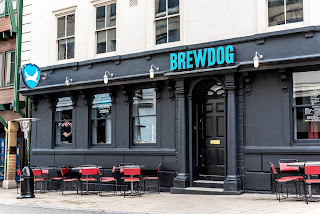 The opening tap list comprised of around 15 Brewdog taps with the remaining 10 being dedicated to the likes of that local brewery, Alesmith, Oskar Blues, Mikkeller, Beavertown and Almanac amongst others.

Alesmith on keg in Norwich. WOAH BACK UP A MINUTE. Alesmith beers are not common at the best of times outside of California, let alone within the UK so the Vietnamese Speedway Stout at at 12% was a real treat, drinking well below its ABV with deep, bittersweet coffee and chocolate flavours.

My other guest beer highlight was Oskar Blues Dale's Pale Ale from Colorado; I've had this in cans plenty of times, and previously also had it on keg but this was probably the freshest I've ever had it, with juicy citrusy hops, well balanced by a light malty backbone; great value too at £4.95 a pint. 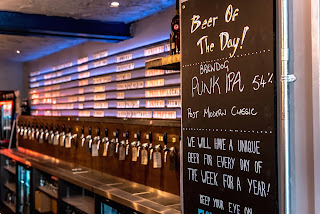 Brewdog highlights were Elvis Juice, a grapefruit infused IPA which in my opinion was better than Magic Rock Highwire Grapefruit as it didn't have the bitterness, just all of the juiciness, it was a beer that I've repeatedly gone back for since the first time I had it. Born To Die was another real treat, so so fresh and delicious.

Jet Black  Heart, however, has been my favourite; it's Brewdog's way of saying "fuck you, Diageo", a nitro stout to kick Guinness in the bollocks, it pours jet black as the name suggests, with a creamy, tight tan head. Coffee flavours echo throughout the creaminess with a refreshing finish; something you don't find in stouts often. At 4.7% and with a nice lightness to it, it's a highly drinkable and sessionable beer and I can see myself drinking more of this than any of Brewdog's other core range beers. 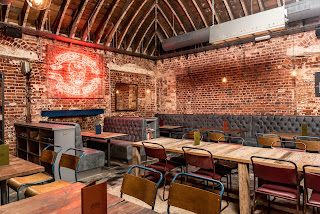 Ah, I've not mentioned the food. In many pubs, food is merely a backing singer but in Brewdog Norwich, food is the lead guitarist which stands in line with the aggressive frontman; the Patty Melt is greasy, dirty and delicious with its cheesy, beefy glory, the sharp pickles cutting through. I will eat a thousand of these and die a greasy, delicious death. My only criticism is that there doesn't appear to be a pork or chicken alternative for people like my girlfriend who are allergic to beef. There is a vegetarian haggis
version and there are also chicken wings,which look delicious though.

I've also found the service to be nothing short of amazing, which I'd expect from Brewdog given my experience in their bars. A lot of hard work has gone into training the staff so that they know their shit and are extremely attentive to everyone's needs.

All in all, it's goddamn Brewdog in Norwich. It's the best thing to happen to the Norwich beer scene in quite some time, and I'm looking forward to seeing what events and beer launches they have coming up.

Brewdog Norwich is on Queens Street and is open 12-12 Sunday-Thursday and 12-2am on Friday and Saturday.

P.S. I'm not that good at taking photos. They came accompanied by a press release from Viola at We Are Romans PR.