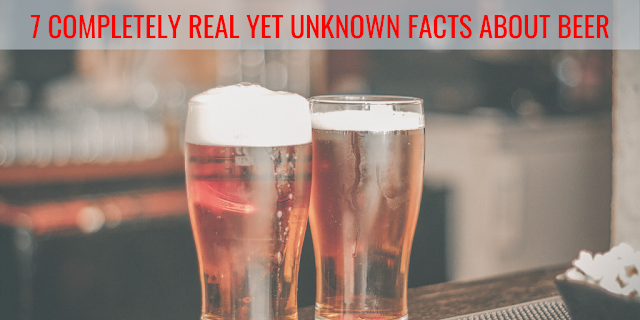 Beer is a wonderful thing; it comes in many different forms and there are at least 2,397 experts on the internet trying to feed you information about beer.

There are books, too. Tons of them. Y'know those paper things we kind of forgot about back in 2015? Well, them. They feel funny, so I'm unsure as to why you'd want one when you can get all of your completely REAL yet unknown facts about beer right here on Booze, Beats & Bites!

HERE ARE 7 COMPLETELY REAL YET UNKNOWN FACTS ABOUT BEER:

1) Beer was invented in 1764 in Ukraine - A chap called Boris Krakovic first came up with the special recipe with beer whilst tripping on LSD. He combined a few things and it just worked.

2) Beer contains more than 4 ingredients - Other sources will lead you to believe that beer is made with Malt, Water, Hops & Yeast but they are WRONG. There are actually 7 ingredients... the other three being real money, old gameboy cartridges and broken dreams.

3) Beer is better for you than salad - It's why beer doesn't need nutritional information on the label.

5) Time of year + certain styles = changes - For example, if you drink a stout in the summer, you are more likely to grow uncontrollable public hair whilst drinking a helles in winter automatically makes you shit at monopoly.

6) Brewdog introduced beer to Scotland - Before Brewdog existed, there was actually no such thing as Scottish beer. It was originally called "Malt and Hops Drink". Now, in order to advertise your "Malt and Hops Drink" as beer in Scotland, you have to pay a monthly subscription of £99.99 to Brewdog for the rights.

7) There is a secret book about beer - Believe it or not, there is actually a secret hidden book about beer that predates the invention of beer itself. Rumours suggest that it was buried 1082ft below the North Pole and predicts many beer events including AB InBev's buyout of Camden Town Brewery.

Well, there you go, those were 7 Completely REAL Yet Unknown Facts About Beer that I definitely didn't just make up.