By Unknown - April 11, 2013
A while ago I wrote a rather angry post about how Suffolk council are trying to ban beers that have an ABV of 6.5% and above. Today I discovered that this is soon to spread to Norfolk. Instead of repeating my angry post (Read: http://www.boozebeatsbites.com/2013/01/booze-65-is-magic-number.html) I thought I'd do a protest post and review a very low ABV beer. 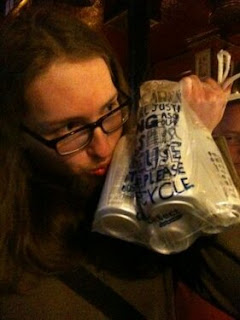 Now, how did this come into my possession? I didn't buy it. A few weeks ago I was at Brodies Bunny Basher at the King William IV Pub in London drinking ridiculously cheap but tasty high abv beers with a bunch of friends, James then disappears for a while before coming back and presenting me with a Tesco bag containing 4 cans of this much to everyone's amusement. For context, if you don't know me already, I am a beer geek but I also have a love for Carling so that is the joke. I was originally asked to do a video review because I did a couple of dreadful ones before whilst drunk but I refused. I still have 2 cans though so you never know!

Anyway, I'm trying to go into this beer with an open mind but it's hard and really, it can't be worse than the last beer I reviewed... can it? 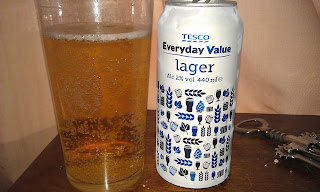 For lack of a better term, it looks like piss with bubbles. No head at all.

Flat but fizzy at the same time.

You read the rest so how the fuck do you think I feel about this beer? Kill me.