I’m usually quite savvy at keeping up with all of the various beery events that are happening within the UK yet somehow Liverpool Craft Beer Expo had somehow eluded me until I got an email about it from Tony who is one of the organisers asking if I fancy going to the trade session. It’d be rude not to really.

I have to say, it sounds very good. It’s taking place at The Baltic Triangle in Liverpool between 14th – 16th June and will feature over 80 keg and 50 cask beers. That’s a lot of beer! 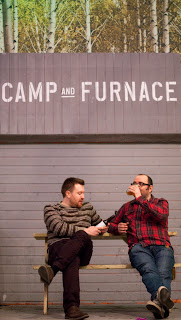 If the beer wasn’t enough to pull you in, the expo will also feature live brewing demonstrations from some of the UK’s best breweries so festival goers can actually see what goes into a beer. Who said beer festivals aren’t educational? Breweries featured will include Camden Town, Beavertown, Magic Rock, Summer Wine, Partizan & The Kernel. All hot breweries at the moment that I have recently been enjoying beers from!

With all that beer, you’re also going to need some food and you’re in for a treat as the menu sounds bloody delicious. It includes a whole host of burgers, hot dogs and savoury doughnuts with interesting twists courtesy of the Camp and Furnace kitchen. Highlights for me include the Piggy/Apple Ketchup/Crispy Bacon/Black Pudding burger, Smoked dog – Whiskey & Garlic Sauce with smoked applewood cheddar & Roast Chicken & Lemon Doughnut with Cider Gravy Dip. I’ll be honest, I’d never heard of savoury doughnuts before getting this press release!

As if the conversation of your fellow beer fiends wasn’t enough, there will also be live music which will be performed in the specially constructed Beer Barrel Musical Bunker.

The festival is being curated by Paul Seiffert, co-founder of The Liverpool Craft Beer Co. I don’t actually think I’ve had any of their beers so I’ll definitely be seeking them out at the festival!

Oh yes, to celebrate the launch of the new website Liverpool Craft Beer Company have an exciting competition which will give the chance for you and your friends to win a brewing experience at Liverpool Craft’s Brewery, allowing to you to design and brew your own beer! Each ticket purchased online before 10th May will be entered into a draw and the winner will be announced in the week leading up to the Expo in June!

They’ve launched a brilliant looking new website where you can buy tickets & read about everything you need to know about the festival: http://www.liverpoolcraftbeerexpo.com