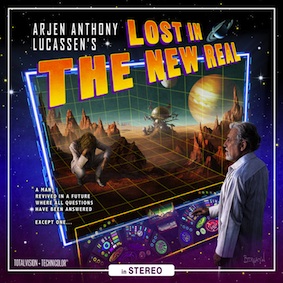 “Of course… Mr. L Wake up slowly. But don’t move yet. You will need time to recover. And welcome back. My name is Voight-Kampff: I am your hardheaded shrink. My genetic team handled the damaged DNA in your head. You are as good as new (maintenance keeps quality.) I will help you adjust to all things changed. Keep you up to date. Now tell me… the last thing you remember”

Mr L. was cryofrozen at the point of clinical death from a terminal illness. He remembers dying and not much else. He is going to need some help adjusting. Luckily he has Voight-Kampff to help!

Whenever I hear the name Arjen Anthony Lucassen, I get excited being the lover of progressive metal that I am, and quite rightly so too. The man is an absolute legend of progressive metal. There’s one thing you can guarantee when this man makes music – It’s going to be more of the same yet somewhat different. Whether it’s Ayreon, Star One or him going solo, it’s impossible to not get excited about a new album.

Lost in the New Real is an epic double disk album about a new world, many years from now. Disc one contains the actual story whereas disc two is a mix of songs that didn’t make disc one along with some covers.

The whole album carries a kind of 60s & 70s style of music with his vocals being heavily influenced by the likes of The Beatles and David Bowie which is especially evident in the second track, Pink Beatles in a Purple Zeppelin.

The album is great fun but there are serious tones running through it, especially in tracks like Parental Procreation Unit which tackles the issue of over population and the fact that in this future world you need a license in order to have children; along with E-Police which explains that you can no longer use the internet for illegal activity as the E-Police are watching every move you make, 24 hours a day and Dr Slumber’s Eternity Home which essentially is a cheerful song about suicide. Yeah, you read that correctly. Dr. Slumber’s Eternity Home is a place where you can happily go to die in a humane way.

I think my favourite track on the album, however, is Where Pigs Fly where he is singing about a lot of things that have happened in the world… in reverse. It’s utterly bizarre but genius.

All in all, this is a bloody amazing album that I’m pretty confident any rock music fan would like regardless of your specific preference. It has melody, riffs, a storyline, amazing vocal talent, it’s utterly bizarre, it’s heavy… it has so much to it that I could go on for days.

I won’t however. I will just leave you with my favourite verse from the album:

“Rocky had no sequels
Arnold never came back
E.T. dialled the wrong number
And Dolly had no rack.”

The album is out NOW on Inside OutMusic, you can purchase the various versions here:

You can watch the music video for E-Police here:

Check out his various projects and bio here: http://www.arjenlucassen.com/