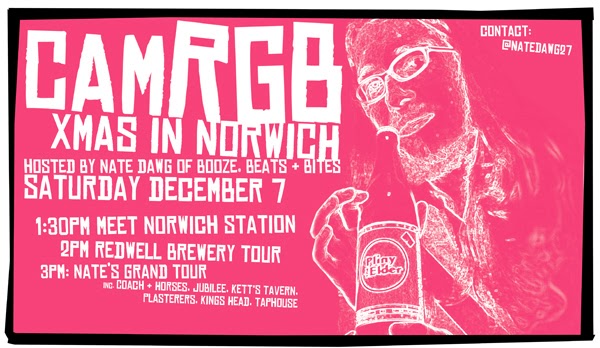 Afternoon, I know I've been slack with this post but y'all have known about it for ages anyway. Amongst other things, there has been confusion and debates and such. Planning an event like this is no easy feat when you're trying to work with other people to get cool things arranged. At the end of the day, everyone involved are being champions to help us have an awesome day!

It's all good though, The CAMRGB Xmas Twissup will be in Norwich this Saturday 7th December and obviously, this ugly bastard is hosting it since this is MY CITY.

The plan is as followed:

2pm: Redwell Brewery tour, then buy a couple of pints of their delicious beer there. They've been kind enough to host us which is fucking awesome of them!

Coach & Horses - You may remember this from my article in CAMRA's Beer Magazine. Plenty of their own beers to choose from, in rather traditional British styles. You can also get some decent pub grub here.

The Jubliee - Lovely traditional pub with many real ales on hand pull as well as a couple of decent kegs, usually from Redwell or Adnams.

Kett's Tavern - Norwich Bear Brewing pub with a range of their own cask ales on, as well as a bloody impressive world bottled beer menu.

7PM Plasterers Arms - This is another big part of the tour because they're doing a cask and keg comparison! 4 of the same beers on cask and keg, with no fucking around. Serious, very cool beers. I don't have a finalised beer list yet, but as one of the best pubs in Norwich I know it'll be awesome! Will update with beers when I know! Thornbridge, Magic Rock, Redwell & Green Jack! £10 for cask Vs Keg comparison!

King's Head - A shitload of decent local real ale, and a superb bottle list! Might be time for a pork pie here!

Norwich Taphouse - All keg beers from all across the UK and again, a massive bottle menu. They also do takeouts on bottles, if you can handle train beer.

It's guaranteed to be an awesome day out! No fucking around with tickets, just meet at the train station at 1:30pm; or follow the unique #Norwichmas hashtag on twitter to keep up with where we are!