By Unknown - December 17, 2013
Last week both Steve Lamond from Beers I've Known and I each received a bottle of Truman's London Keeper. After having a chat about it on Facebook, Steve came up with the great idea of guest posting our reviews on each others' blogs, which I thought was brilliant!

Anyway, Truman's was a legendary brewery in the heart of London on Brick Lane that was first established in 1666. It closed in 1989 and after 24 years they managed to revive the yeast and open a new brewery in August 2013.

Steve's review is below:

London Keeper is a limited edition release to commemorate the first brew out of the new Truman’s Brewery. It has been 24 years since any beer was brewed under the Truman’s name.
To make something special an export stout from 1880 was selected from the records, unusual because it used American hops, once again showing that nothing is new in the world of beer.

It certainly looks the part, 750ml bottle resplendent in its ivory wax cap and letterpressed, handsigned label. I think they perhaps missed a trick not numbering the bottles, as this can often appeal to collectors. 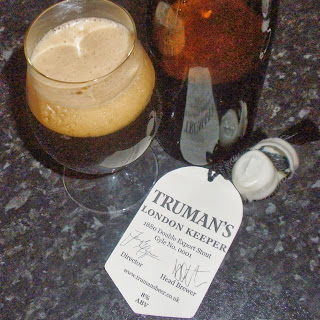 So what did I make of the beer? It’s a dark chestnut tinged mahogany with beige head collapsing to a lacing. It brings rich cocoa and slightly tart plums on the nose. Very full bodied, sweet, dry tobacco and roast barley. There’s a slightly acidic edge which suggests it may sour on ageing and dry finish which seems to e very brief. This to me tastes like it needed some time to develop in the bottle, perhaps even before release, though maybe others prefer a sweeter stout?

So would I buy another bottle for ageing? No, £17.99 is far too high a price, even for a special edition as this is. Whilst enjoyable it doesn’t compete with other stouts of similar strength on a flavour basis, at least not in its unaged form.  For £8 less I can pick up an equivalent sized bottle of Marble Decadence or 500ml raspberry stout from Thornbridge. Nor has it undergone any special treatment such as barrel ageing or have pricey ingredients (coffee, vanilla, high demand hops). But for a piece of history? Perhaps £18 is reasonable then.

I’m of course grateful to Truman’s for sending me the beer and will certainly look to try their other stuff on the back of this.

Here is some more info on Truman’s from Martyn Cornell and an interesting article from Spitalfields life about the genesis of the beer. Cheers Nate for hosting my thoughts and for waiting for me to get them typed up!

Thanks to Steve for collaborating with me on this, it was a pleasure!