Today we're visiting Mexico with Dia De Los Muertos Immortal Beloved Hefeweizen. The rest of theirs I've had thus far have been shit but I'm hoping they can't fuck up a Hefeweizen. 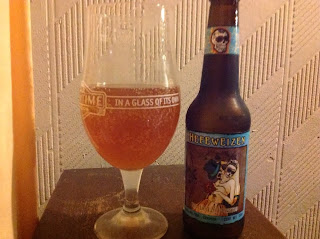 Just looking at it, I'm disappointed. No big, thick creamy head like I would like to see in a hefe.

The aroma? Blue Moon. Yeah, we've all tried Blue Moon. It's like that. Orange cordial and cloves. Blah.

How does it taste? Like a weaker version of Blue Moon. Seriously. I'm fucking disappointed, but I expected to be.

Overall... I think Blue Moon is alright. A weaker version of Blue Moon? No. Go away. I'm gonna neck this and get something decent.

Hopefully Day 5 will be a success...