By Unknown - March 22, 2014
A while ago on twitter I was shouting for guest reviews of terrible beverages and the first to shout was my buddy Matt Smail who decided to review a drink from his youth - MD (or MAD DOG) 20/20. I've not had the pleasure of imbibing this particular beverage as my teenage years were all about Frosty Jack's, so I was certainly interested in what he has to say! I think we both forgot about it for a while then last night I was listening to the new Freddie Gibbs & Madlib album and during the track "Knicks" he mentions MAD DOG 20/20 which reminded me to tweet Matt about his review.

Anyway, what are his thoughts? 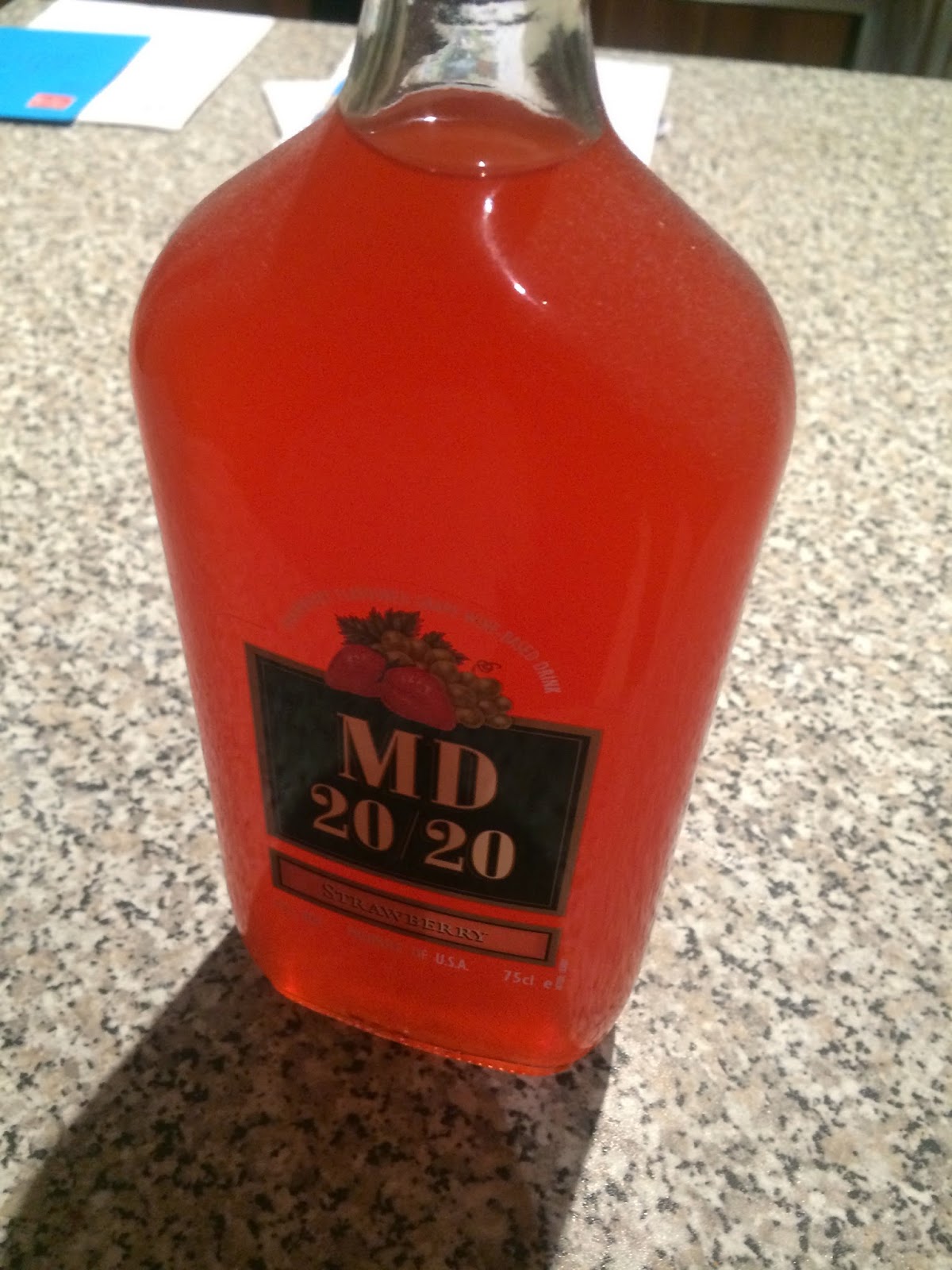 "It’s been a reflective evening for me. The day was a haze of conference calls crammed between meetings at opposite ends of Yorkshire and then as soon as I arrived home, I was straight back out again to shop for this weekends festivities, which happen to centre around my 31st birthday! Just as I walked out of my local ASDA, weighed down with a ton of shit that I should have bought a week ago, I received a tweet from Nate reminding me of the fact that I should have written this review about Mad Dog 20/20 over six months ago. I chucked my phone back in my pocket - “there’s nothing I can do about it today,” I thought. 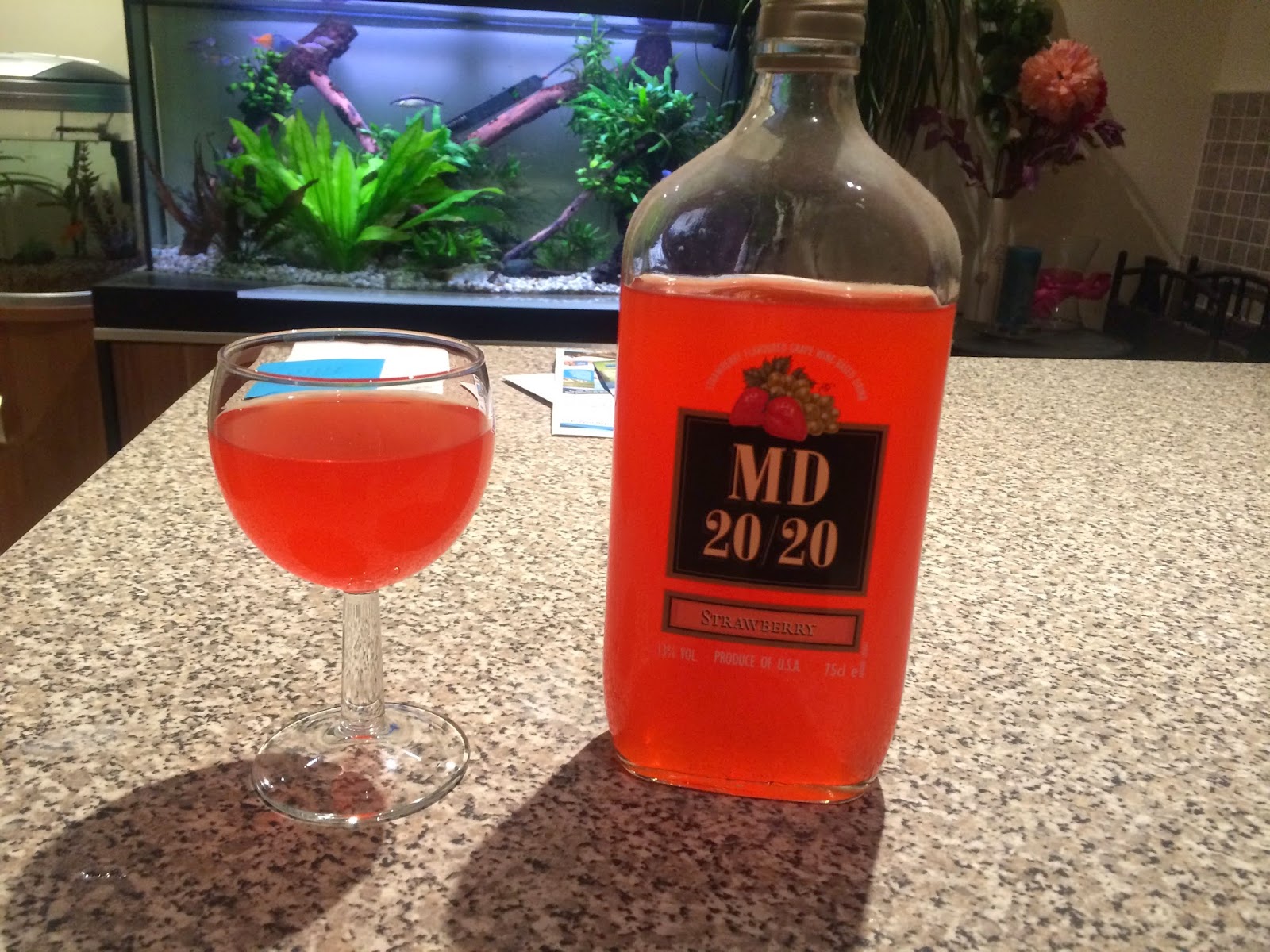 I got home, threw together about 14 kilo’s of veggie chilli and wondered what to do next. With the chilli bubbling away, the thought of getting up at 7am to first barbecue and then slow cook a load of pork shoulder began to cross my mind. Then I thought of the pot of barbecue beans I made (which took 8 hours) yesterday evening. At this point, it became apparent - I am now an adult, doing adult things. As you have probably guessed, and possibly as a brief glimmer of defiant rebellion, I decided to drink the entire half litre bottle of Mad Dog. 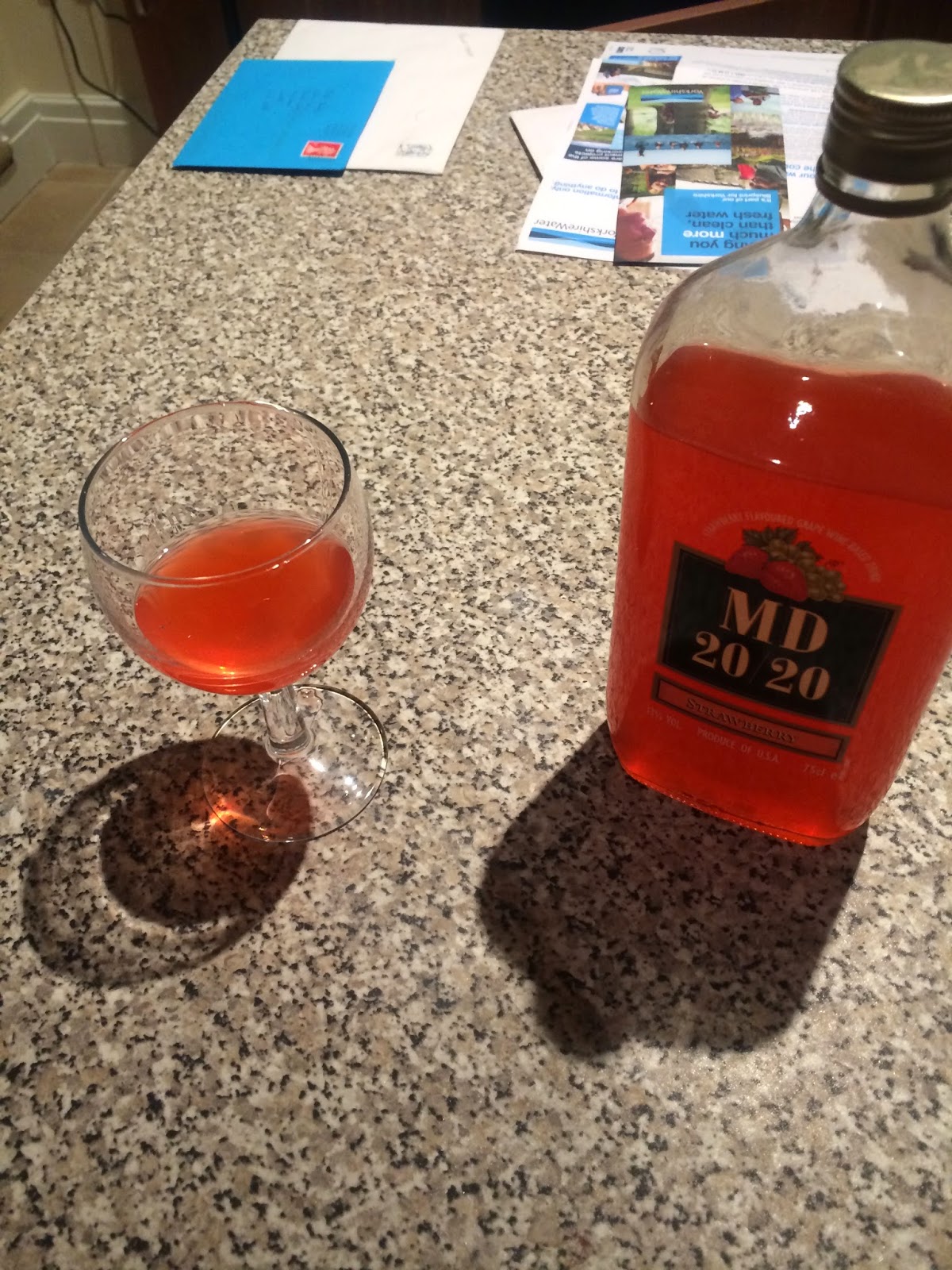 Before I go on to talk about how Mad Dog 20/20 presents itself to my present, adult self; I think I would be doing it a great disservice if I didn’t mention it’s popularity with, well, children. I first encountered this foetid mix of rubbing alcohol, colourings and preservatives when I was about thirteen years old. Three 250ml bottles (Orange, Strawberry and whatever the blue one was) were enough to get me absolutely arseholed, and by 9pm I was in bed chucking up into the mop bucket. That wouldn't be my last childhood foray into the world of Mad Dog though, and I am absolutely certain that most people reading this will already be smiling at their own similar memories - perhaps you lay down in the road and rolled down it whilst boring adults beeped their horns and flashed their lights…? Maybe you and your mates found the courage to go into the local corner shop, attempt to distract the staff with your witty banter and then nick some Mr Kiplings’ Apple Pies…? Maybe they are my memories, but I bet yours are similar and equally ridiculous. That is, after all, why we all used to love Mad Dog, and perhaps the clue is in the name, who knows? 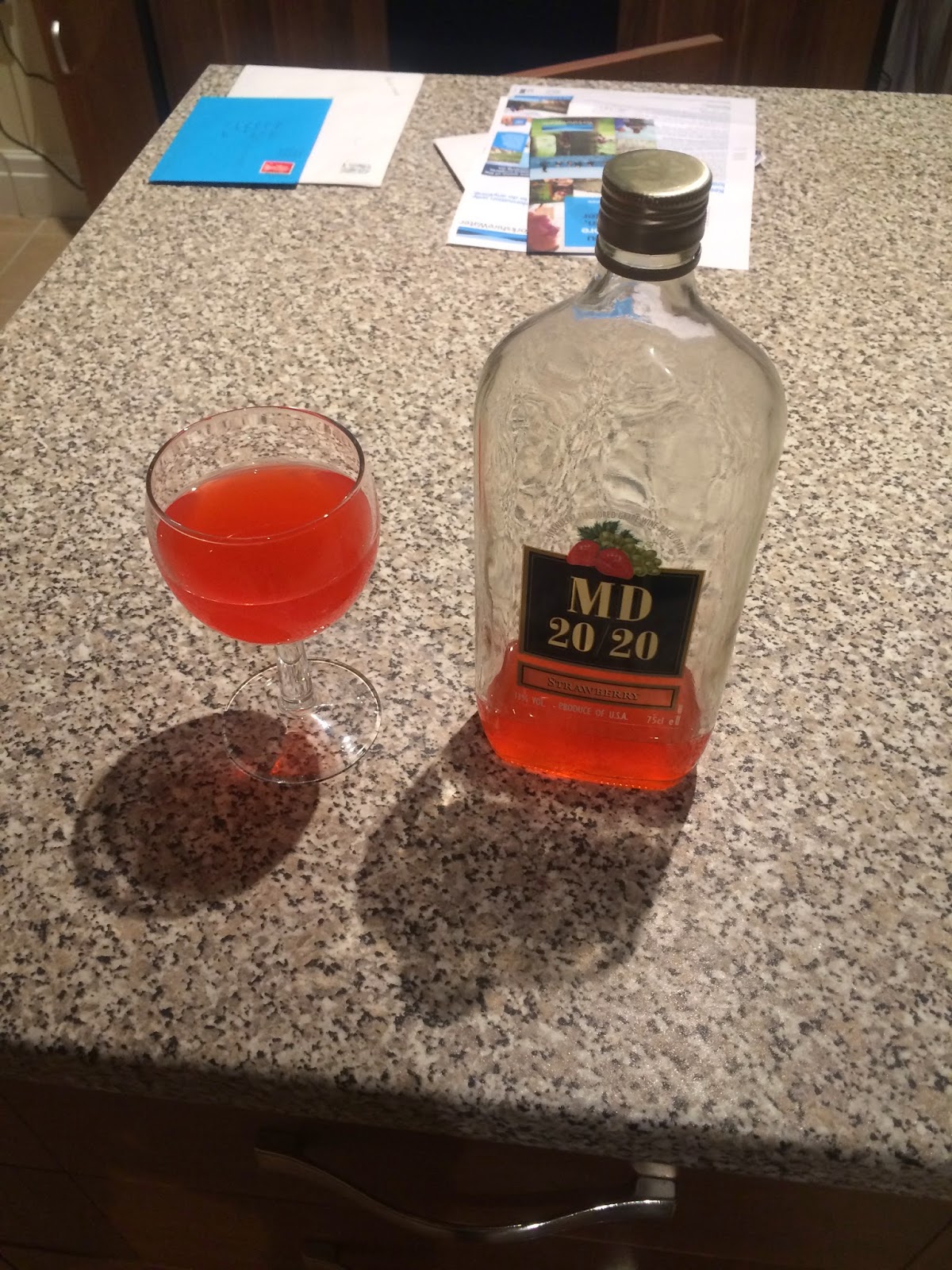 Back in the present tense, and upon inspection (whilst trying to avoid being too libellous) Mad Dog is pure evil. I stared at the completely unnatural, off-red liquid sitting in front of me. Mad Dog (particularly the much sought after Strawberry flavour) is a drink which I used to seek out at every opportunity when I was young - too young, perhaps. Now, I realised, I’d been putting off writing this review because I didn’t want to experience what was in the bottle. I knew it was going to be vile, but I opened it anyway. 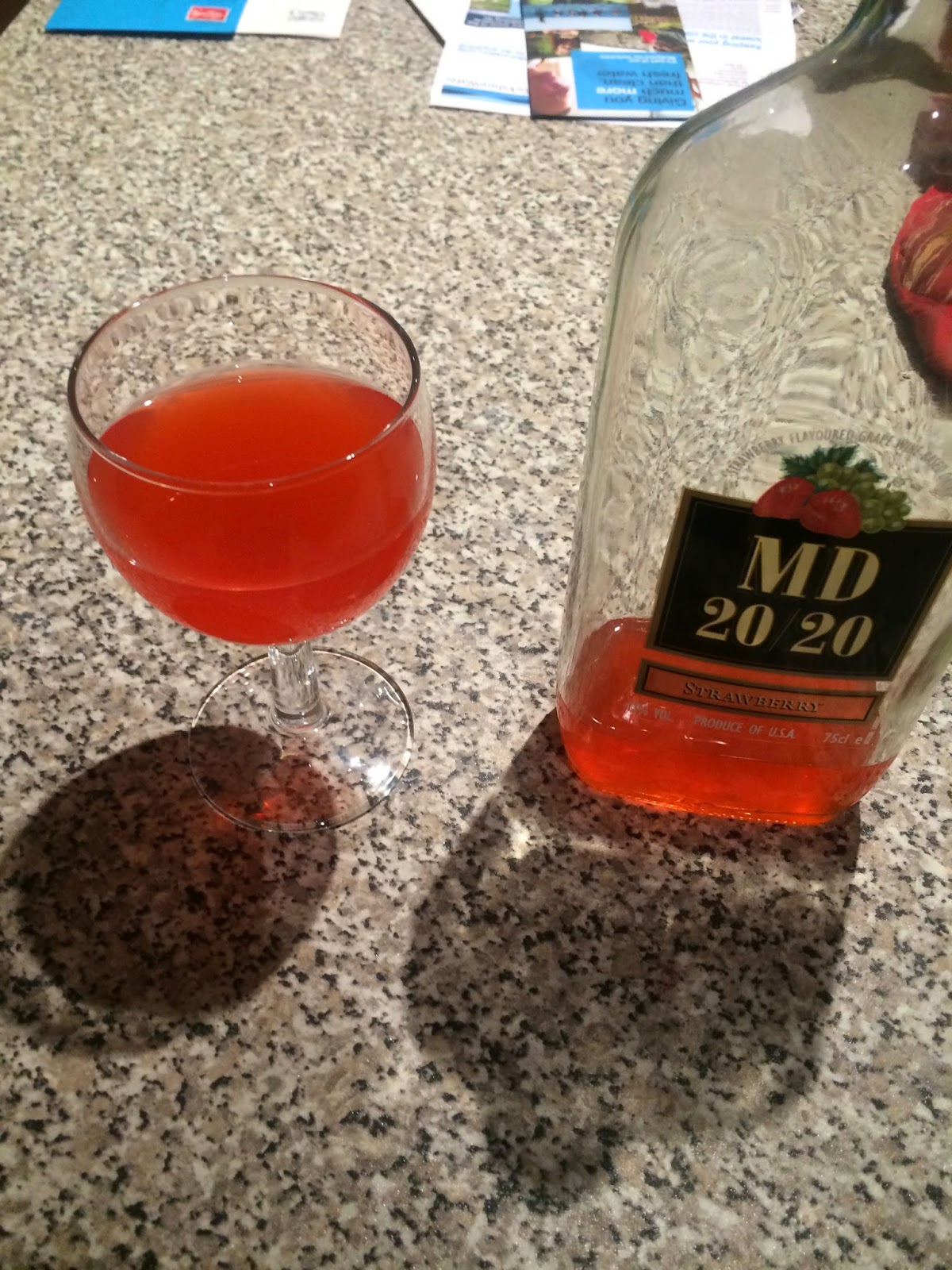 The smell is unavoidable, indescribable and utterly offensive. Imagine an intoxicatingly sweet juvenile medicine like Calpol, mixed with pure, not-fit-for-consumption alcohol and then the lingering smell that resembles the breath of someone who has been eating those synthetic strawberry flavoured sweets. I said before that Mad Dog is pure evil - what I mean by that is that it almost certainly contains no natural ingredients whatsoever. The flavour of it is such that it might as well be from outer space. Again, medicine is certainly present, as is a slightly concerning (considering the drink is 13% ABV) alcohol burn, alongside that weird, completely wrong taste of strawberry flavouring. Small sips initially go down OK, but less than a glass into drinking it, I began to feel queasy and my lips were sticky with the (probably ridiculously high) amount of sugar I was ingesting. 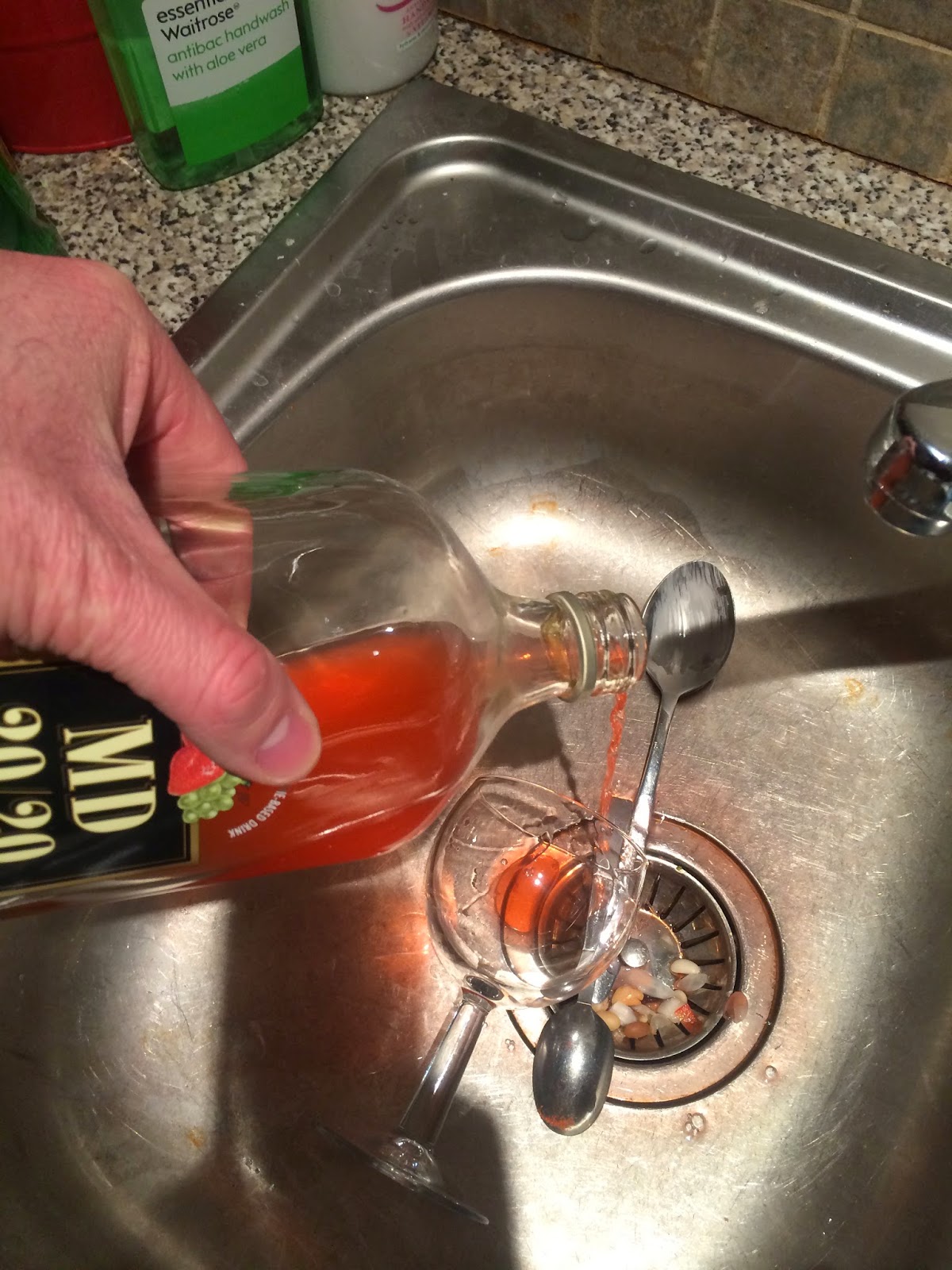 I got about three quarters of the way through the bottle (including what I left in the last glass) before I had to give up. I actually  breathed a sigh of relief when I poured the last bit down the sink. Like the torrent of puke that left my body some eighteen years past, watching that strange, translucent liquid glide down the plughole brought me a brief moment of happiness - “at least” I thought, “that will not be inside me.” Whilst I write this review, I’m sitting drinking a bottle of Harviestoun Schiehallion which costs approximately £1.99 for a 300ml bottle. Why the fuck would I want to drink Mad Dog?

Do yourself a favour and trust me. You’re memories may be good, but like the original 1980’s version of Gauntlet or that Dolph Lundgren He-Man movie (Masters of the Universe,) Mad Dog 20/20 taste absolutely fucking awful and is made from the kind of ingredients which should never enter the human body. In fact, a last point on this - this is a drink which is so dodgy, I can only imagine that it is created by a group of failed scientists who stand around in labcoats concocting liquids that are literally on the absolute borderline of what is legally acceptable. Put that bottle back on the shelf son and get yourself a beer - or if you must have something pink, fruity and of dubious origin, then for fucks sake buy some Echo Falls rose!

Massive thanks to Matt for enduring this poison for my own amusement! He's a really good chap and you should follow him on twitter, especially if you're into beer and gaming: @ragingkileak