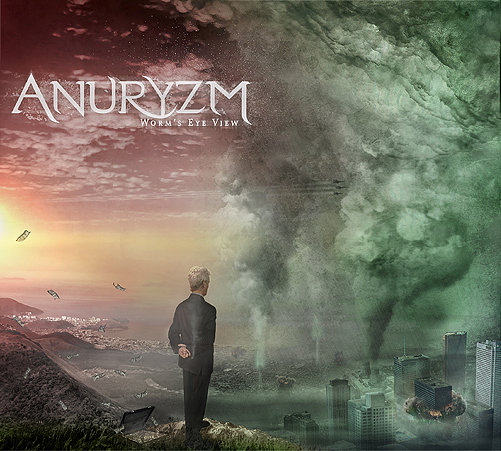 Originally self-released in their homelands of the Middle East in October 2011, Anuryzm teamed up with Melodic Revolution Records in order to get their debut album Worm’s Eye View more widely distributed. Worm’s Eye View was re-released in July 2012 and has already had a mushroom cloud of success.

So, what of the album?

The album starts with an atmospheric, progressive synthesised intro on Fragmenting The Soul before getting into the heaviness of the metal. With beautifully matched riffs, drums, synth and Nadeem Bibby’s vocals you just know this album is going to be promising. Nadeem perfectly executes more aggressive death metal style vocals as well as wonderful clean vocals that could be likened to flower petals singing. I’ll say right off the bat that they’ve opened the album with my favourite song of theirs.

The song then ducks into Wide Awake which again has a progressive intro, but this time it’s somewhat different; more like a radio frequency. All in all, the instruments are heavier here but the vocals are mostly clean.  We then get into Sintax Of Trinity which is incredibly interesting as we’re getting the same wonderful heavy progressive metal but with a distinctly middle eastern twist. This leads wonderfully into the acoustic sounds of Skygazing then back into more heaviness later in the song.

The album continues to take a multitude of twists and turns with a nice balance of heaviness and mellowness. It genuinely is a unique album.

All in all, the 8 tracks on this album make for an awesome debut album and leaves you eagerly waiting for their second release which is to come in early 2013.

Check out the video for Breaking The Ballot below: