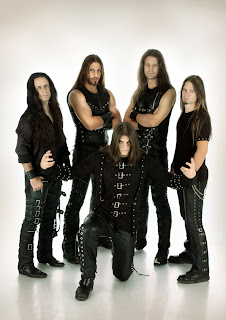 Wisdom are a Hungarian Power metal band that formed in 2001. After some promotional records, they released the Wisdom E.P. as an attachment to the Hungarian heavy metal magazine Metal Hammer which put them firmly in the public eye; then, in 2006 they released their first full length album Words of Wisdom.

After another E.P. in 2007 entitled At The Gates, some tours and some opening spots for popular bands such as Iron Maiden, Judas Priest, Heaven and Hell, Europe & Helloween, this year they have released their second full length album Judas.

Each song that Wisdom writes is based around a famous quote which is a brilliant and unique idea because there is no solid theme or story like with most power metal bands.

So, what of the album? 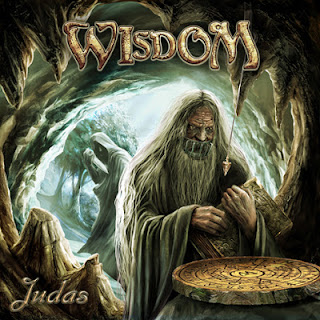 The album opens with the atmospheric sounds of the forest on Fallin’ Away From Grace and launches into the captivating and catchy musicianship and lyricism that you would expect from a power metal band. By the second time the chorus came along, I already found myself singing along. The album takes a slightly heavier turn with Somewhere Alone with even more desirable riffs, enchanting vocals & catchy lyrics.

The single from the album is the fourth track, Live Forevermore. If I were to hear this on the radio or in a club, I would be extremely happy indeed. Again; catchy lyrics, great riffs and magical vocals. I think this is slightly heavier than a lot of the songs on the album, and I’m fine with that.

The album also has a softer, acoustic side when we get to Heaven & Hell. The track opens with pattering of rain then an acoustic guitar kicks in with even softer, emotion filled vocals. We get electric guitars as well but this showcases the more emotional side of songwriting. Brilliant.

As far as power metal goes, we haven’t seen much of the more cheesy side until Silent Hill. I’m not gonna lie, the cheese in the lyrics made me laugh the first time I heard it and that can only be a good thing. Power metal seems to have lost that ‘pop’ edge in recent years but thankfully, Wisdom have brought it back with this song. Lyrics like “Welcome to the nightmare of Silent Hill; life is more than a fantasy” restore my faith in the genre.

My favourite song on the album is the grande finale Judas Featuring Mats Levén from Therion who plays the voice of Judas. What I hear when the track starts sounds like a dank jail cell with dripping water; then the majestic instruments start and there really is quite an epic build up to an unforgivably catchy riff that you seem to move with. Again, the chorus instantly gets you singing along and raising your fist in an epic manner. If they don’t play this song live on the Swedish Empire tour with Sabaton and Eluvitie (Dates below), I’ll be disappointed.

All in all Wisdom – Judas is a phenomenal album that has truly restored my faith in the genre of power metal. I feel that a lot of power metal these days is trying to focus more on the technicality of the music rather than epic songwriting. Wisdom sounds like the bastard child of Blind Guardian and Sonata Arctica and this pleases me greatly. Judas is certainly a strong contender for album of the year.

Wisdom – Judas is out now on Noise Art Records

Wisdom will be on the Swedish Empire Tour with Sabaton & Eluvitie in the U.K in November; Dates are below: