Booze: The Day of Many Magic Rocks… 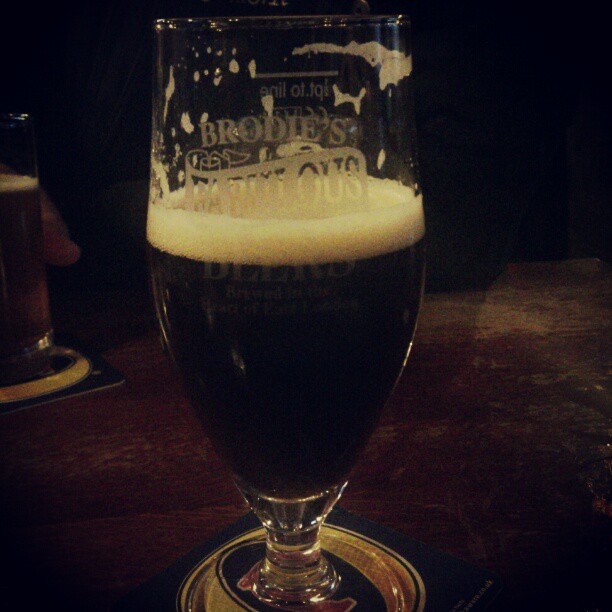 When beery events happen, they are usually only announced like a week before the event so with me living in Norwich it causes a problem. Short notice would be fine if travel prices weren’t absurdly expensive.

This one, however, was announced over a month ago. I did a little dance and I jumped for joy before booking my means of travel. That means of travel, unfortunately, was the coach due to shoddy trainlines. I’m not paying loads of money to have to get a bus anyway, y’know?

Anyway, the event was Magic Rock Brewery Tap Takeover at The King William IV in Leyton, as well as the launch of their collaboration with Brodies; The Great Alphonso, on cask and keg.

I’ve been excited for fucking ages. I was counting down the days until I can drink awesome Magic Rock beers and hang out with awesome beery twitter twazzocks.

The Day of Many Magic Rocks finally arrived and armed with my tableaux and a wallet full of cash, I got the coach to London. I was shattered and trying not to fall asleep. I survived.

The King William IV is a fucking massive old school boozer with a brewery out the back. It was packed due to them showing the football but that didn’t get in the way.

I started off with a half of The Great Alphonso on keg (5.6%); it was everything I was hoping for. It’s a US style Pale Ale infused with Mango… first sip was bursting with mango before developing into more of a hoppy pale ale and finishing with some nice sweetness. I did worry that it would be too sweet but I think the malt kinda balanced it out.

Next up was Tequila Barrel Aged Clown Juice (7%). Considering I’ve not even had the original Clown Juice, I can’t compare but I really liked this. Clown Juice is a India Wit Ale which I guess is a Wit beer with a fuckload of hops. That’s what it was. I wouldn’t call it a wit or an IPA… it’s a fusion and it’s not. I thought the tequila barrel ageing added something to it but not quite tequila. I really enjoyed it though.

Rock Star came next; this is a collaboration with Dark Star brewery. It was good but probably my least favourite of the day, overall. It wasn’t dull by any means but it didn’t really excite my tastebuds either. It’s a hoppy American Brown Ale.

Next comes a mistake; well, not really, but it’s Human Cannonball. Was it too early for a 9.2% double IPA? Probably but I’d wanted to try it for fucking ages. It was very delicious. A well balanced DIPA, with grapefruit and a light bitterness.

Big Top arrived in my next glass; it’s an Imperial Red Ale weighing in at 8%. It’s dark red and has notes of liquorice and red fruits. It was quite nice.

I felt like going dark next so a stout was the case; this was Sherry Barrel Aged Dark Arts (6%). Wow; what a beer. Again, I’d not had the original version so I can’t compare but here we’ve got coffee and a bit of chocolate before some wood and a nice hint of sherry and sweet fruits. Fucking love it.

I then remembered what a wise man; Joel from Evile had once told me. “Go forth and drink Magic Rock High Wire NZ; even if it means robbing a bank”. Thankfully, however, I did not have to rob a bank. I just had to pay a couple of quid. So, High Wire NZ (5.5%) on keg. I love the original High Wire but with New Zealand hops, it blew my tits off. I then needed to have it on cask which was actually so much better!

At this point, my good buddy Matt from TotalAles arrived… sadly he was late to the party due to a busy day of selling guitars. Thankfully, however, I’m a nice guy and saved him some beer.

Next up was Rapture (4.6%) on keg. I’d had this red ale on cask at Norwich Beer Festival in 2011 and thought it was awesome. I still much prefer the cask version.

At this point, I was quite drunk and swaying. Oops. One last beer, OK? It’s the big one, the incredible, the one I’ve wanted to try for ages… Bearded Lady. A 10.5% Imperial Brown Stout. It was totally fucking delicious. Heaps and heaps of bitter coffee and a really thick mouthfeel. A real sipper for sure.

My overall favourite of the day is something you’re not going to expect, given that I’ve previously ranted about barrel ageing…

Massive thanks to Magic Rock and Brodies Brewery for an epic event. I don’t use the word epic lightly.

Thanks to Andy for the bottle of his homebrewed Pomegranate Saison. It was bloody lovely!

If I forgot or insulted anyone, I’m sorry but I’m also not. You’re awesome.

So… let’s look forward to the next event on Saturday: http://totalales.blogspot.co.uk/2012/10/the-2012-camrgb-london-xmas-twissup.html