The Session #70 – Don’t Believe The Hype

The Session is a monthly event for the beer blogging community which was started by Stan Hieronymus at Appellation Beer. On the first Friday of each month, all participating bloggers write about a predetermined topic. Each month a different blog is chosen to host The Session, choose the topic, and post a roundup of all the responses received. For more info on The Session, check out the Brookston Beer Bulletin’s nice archive page.

This months session is hosted by David at Good Morning… and is all about hype and whether it changes our perception.

As a rule, I’ve always listened to the great Chuck D from Public Enemy when it comes to hype. He tells us in the song above to not believe it. Don’t Believe The Hype.

Sometimes, this is the hardest thing to do. I have believed the hype on occasion. I have defied the rapper I worship most, one of the greatest lyricists of all time. I have defied Chuck D. I’ve spoken about this before, kinda, when I reviewed Russian River Pliny the Elder.

A story about how I generated hype…

Once upon a time, Kev told me that he was going to brew a Black IPA. I was instantly excited because I don’t ever recall a Black IPA being brewed in Norfolk.

Kev told me brewed a test batch of this beer in his kitchen and it was good. He then said he was going to brew an actual batch in his brewery.

And then The White Lion were having their beer festival and Kev told me that Black Hops was going to be on the bar for the first time.

I counted down the days. I was excited. I had got my buddy Alec excited too. We needed this beer so much. We had created his hype.

I was counting down the days to #BlackHops on Twitter. People were asking me what #BlackHops meant. So I explained. Golden Triangle Black Hops IBA (Indian Black Ale). Yes, thankfully Kev avoided the oxymoron of Black India Pale Ale.

People on Twitter were telling me that they also wanted to try it.

D-Day arrived. The day that I would finally get to try Black Hops.

Did Black Hops live up to the hype I had created?

Hell fucking yes it did.

Black Hops is exactly what I want a Black IPA/IBA/Cascadian Dark Ale to be. 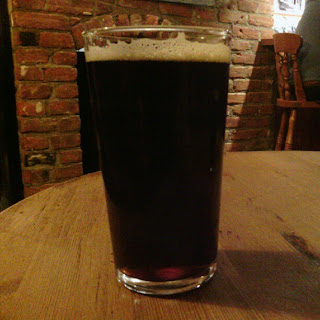 Look:
It’s black. You can’t see through it.

Aroma:
It smells of citrus hops but it also has a slightly roasty aroma coming through. The roastiness isn’t overwhelming so it’s true to the aim.

Taste:
It tastes of grapefruit, orange and red berries. It has a late bitterness that lingers for a little bit but doesn’t cut your throat and then a little bit of burnt toast before finishing with more hops.

It was simply wonderful. For me, it lived up to the hype I had created. Alec wasn’t there to taste it on the first night I had it but I conveyed this awesomeness to him and my hype definitely lived up to it for him too. This is the beer we needed in our lives.

The question is; did it change my perception?

Did it taste better because I was so excited about it?

No. It tasted awesome because that’s what the fuck it is. It’s an absolutely fucking incredible beer. It’s a beer I keep going back to because it’s that good. It’s a beer I actively seek out and tell people to seek out.

I think if it did just taste good because I’d hyped it up so much, on my second pint I would’ve stopped or just at least not been that bothered about but it’s a beer that I’m constantly excited to drink.

Chuck D can be wrong.