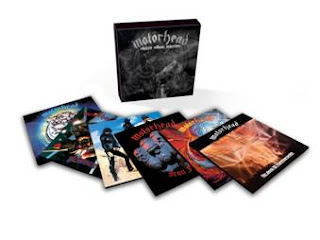 Forming the band after his unceremonious sacking from Hawkwind (following an unfortunate narcotics misunderstanding at the Canadian border) then naming them after the very last song he wrote and recorded with the space cadets, Motörhead mainman and force of nature, Ian Fraser Kilmister, or Lemmy to the world, gunned the accelerator and wheel spun his very own ‘Silver Machine’ into the fast lane of the UK singles and album chart, leaving on-lookers spitting dust from gritted snaggleteeth! Through varying line-up changes and more ups and downs than a spin on the Whacky Goldmine, Motörhead have released some of the most influential Heavy Metal Rock N’ Roll known to any sub-human, and in doing so, have been widely regarded as spawning the illegitimate genre that became known as ‘Speed Metal’.

Now six of the bands’ best albums are being released all in one box. They are original masters, housed in gate-fold replica wallets with original artwork - a perfect introduction to one of the greatest Metal bands in the world.

If you don't have any of these albums in your collection, you may as well hand in your heavy metal license. My personal favourite, Overkill, is an essential album to own. It is everything you want in a heavy metal album. 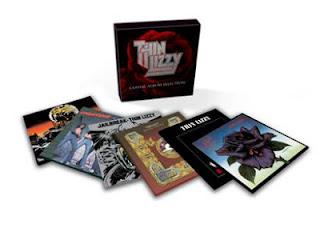 On 11th June Thin Lizzy will be releasing a wonderful Classic Album Collection. Presented as mini-LPs and housed in an attractive slipcase, these limited edition artist album box sets are the ultimate overview of the band’s career. Whether you are looking for an introduction to Thin Lizzy or if you are simply looking to bolster your collection this ticks all the boxes.

Thin Lizzy are yet another band whose music you need to own. They have the right mix of hard rock and Irish folk. Jailbreak is an essential album to any music collection - It's heavy and Irish, what's not to like?

If you don't own all of these albums already, you have no excuse now.


Both of these box sets are out now and will be available from any music retailer with half a dick.