Beats: Future of The Left – The Plot Against Common Sense Review 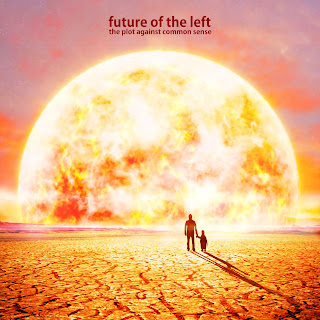 I want to start out by saying that I feel embarrassed that I hadn’t even heard of Future of the Left before I got a press release with a link to “I am the least ofyour problems”. I am literally ashamed of myself.
I’m glad I listened though as I quickly fell in love with them purely for that song.

When I got sent the album stream I was unusually bemused by a note in the email “I’ve attached the closest thing we have to a bio – this band does things a little differently, and so we do not have a traditional one.” – I knew the album was gonna be a bit special.

Literally all I know about them is that they’re from Wales and apparently this album was originally supposed to be a Broadyway musical based on the phone hacking scandal but it was shelved due to budgetary reasons.

So, for the album.

Musically, it’s very bass-centric alt/punk-rock. The bass guitars are literally groundshaking. There are other instruments, obviously, but this album seems to literally built on solid basslines which is something I definitely cannot fault. I really like the vocals too – Andrew Falkous sounds like he’s shouting through a megaphone through the whole album which was probably the aim and it works well.

This album is lyrically and conceptually amazing. Falkous is clearly either absolutely nuts or an absolute genius. I’m more inclined to believe the latter.

The one song that really grabbed my attention, purely because of the title was “Robocop 4 – Fuck off Robocop” It’s talking about the creative bankruptcy of the movie industry, a topic we can all agree with. Musically, it’s really weird. Just punky noise and lyrically, it’s even weirder and absolutely absurd:

“Pirates of the Caribbean 47, Johnny Depp plays a robot pirate
Who loses his wife in a game of poke and tries to win her
Back with hilarious consequences”

What the fuck? Amazing.

You’ve also got the madness of “Sorry Dad, I was late for the riot” which is an anti-rioting song with Falkous making excuses for why he couldn’t go to the riots. Poor guy had a bad back.

Another highlight of the album for me was the final track “Notes on Achieving Orbit” which is talking about the way people view celebrities. People hold celebrities in too high esteem, another topic we can all agree with: “Where were you when Russell Brand discovered fire? Did you join with the crowds in Trafalgar square and watch on a giant screen?”

All in all, it’s a fucking top album. Musically it’s good but I don’t give a damn about that when it’s lyrically nuts/genius (delete as applicable).

The album is out on Tuesday 12th June and I’d highly recommend buying it if you like punk rock absurdity.

To confirm my findings that this album is totally awesome, you can stream it here: