Part 2? Wow. Yes. City of Ale is so awesome that it is going to warrant 4 posts. No Joke. Mental. If you missed Part 1 – The Launch Party, you can read it here: http://www.boozebeatsbites.com/2012/06/booze-city-of-ale-part-1-launch-party.html

Next up is Friday!

After work I met up with Stu and Andrew who had come to Norwich from Yorkshire to drink beer. What a pilgrimage... dedicated, right?

I met them by St Gregory’s and we went to The Plough. I’m pretty sure the original plan was just to have one pint in The Plough before moving on but that didn’t happen... Andrew was getting agitated as he was hungry and had to wait ages for the BBQ. Stu also had a bit of a problem ordering a burger and ended up not getting one. Booze, though, that worked. Started with a pint of Grain 3.1.6. which is awesome... it’s a cask lager... hoppy and lager-y. Tastilicious. I then went onto an old favourite, Blonde Ash which is a wheat beer – flavours are citrus, coriander and wheat... a nice, easy drinking summer beer. I then had The Best which is a best bitter, more potent than most with nice coffee and chocolate flavours then finished with Redwood which is a ruby ale... fruity and sweet. 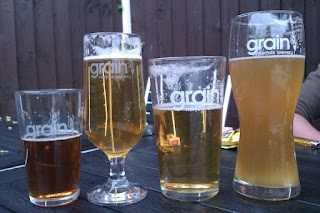 Next stop was The White Lion. I really like this pub. 8 cask ales and one kegged lager – Moravka which is a Czech style lager from the peak district. I had one beer here – Milton Karolides. I’d definitely say it was an IPA although ratebeer calls it an English Strong Ale. It was beautifully hoppy, sweet, dry and bitter. I could’ve definitely drank more although it was time to move on!

Went to The King’s Head which is a real ale pub. It is just that. There are no keg fonts. If you want a lager, you can grab a foreign bottled beer from their wide selection which is exactly how I was feeling. A bottle of Jever went down very nicely indeed. My only issue is that I wasn’t offered a glass with my bottle of beer, I tried to attract the attention of the bar staff but it wasn’t working so I just gave up after a while. Jever is a pleasant enough, moderately hoppy lager – Drinking it reminds me of Hamburg 2008. I had an ale afterwards... I wanted something hoppy so I asked for recommendations from the person behind the bar; she let me sample 3, none of which were very hoppy. I stuck with the third one which wasn’t very memorable – In fact, I can’t even remember the name!

Stu and Andrew left while we were still in The King’s head so Alec and I decided that The Playhouse was a viable option as a last stop... I had Grain India Pale Ale. I had to end the night on a hoppilicious beer. Mmm...

Then it was off to bed... that many pints is absurd.

Part 3: A beer run and some more pubs is coming tomorrow...