Well, well, well... we have reached the end of my 4 part City of Ale series and I’m sad that it’s ending.

It’s been a good one... A beer filled launch party, pub crawls & a trip to beer mecca but now we’re at the end. The final day of my City of Ale adventure and what a way to end it!

On Monday Justin, the Mikkeller obsessed Essex boy (I highly recommend his blog: http://masonjust.blogspot.co.uk)  met me at The Vine for a Beer & Thai Food pairing session.

We met at The Vine a little after midday and ordered a pint each to start us off – I had Oakham JHB; It’s a beer I really like and have regularly drank for a long time. It’s full of citrus, biscuity malt and has a grassy finish. I love it. Justin had Norfolk Brewhouse Moongazer Amber Ale; Norfolk Brewhouse has only been around for about two months but they’re making some great beers.

We swiftly finished those and ordered another pint. I had Brecon Brewing Diamond Beacon; this was a bit of a weird one, I found it toffee sweet with weird fruity flavours. It was alright but nothing special. Justin had Panther Black Panther; A beer I have had many times before... A very fine example of a stout – Sweet chocolate & roasty with a bit of vanilla.

It was time to order our starter tasting platter. 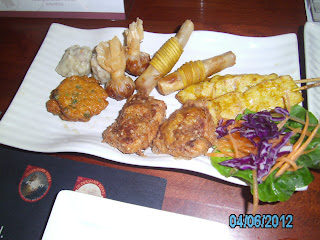 Now for the rundown!

We decided to start off with Chicken on toast with homemade soy sauce with Black Panther – What a match! The chocolate roastiness of the black panther combined with the light, spicy chicken and dark soy sauce was – and I don’t say this lightly – a match made in heaven!

Next up was Satay Chicken Skewers & Peanut Sauce with Tuborg – Ok, Tuborg isn’t something you’d usally see in this line-up but it actually worked really well with the chicken and the salty peanut butter. It all just came together really nicely. 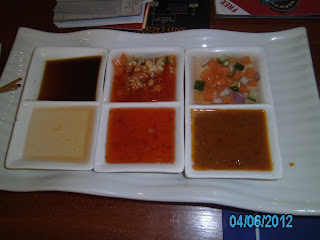 Prawn Spring Roll & Sweet Chili Sauce with Brecon Brewing Diamond Beacon came next – For me this was the weakest match because the chilli overpowered the beer too much (definitely not bitching on the chilli sauce, that’s the shit). I think it actually could have worked with the Satay Chicken Skewers, alas, we went for Tuborg with that one instead.

Moving on to a Thai Fish Cake & Pickled Sweet Chili Sauce with Budvar was a grand idea – The fishcake was nicely spiced, you could really taste the lemongrass but it wasn’t overpowering and the pickled sweet chilli sauce really added spiciness and a nice, well, pickling which worked well with the yeasty, carbonated Budvar.

Let’s go for the Pork & Prawn Dumpling next and try it with some form of Pickled Vegetable Dip & Norfolk Brewhouse Moongazer Amber – That works. The soft pork & prawn dumpling was flavoursome. It was spiced perfectly and had a good load of minced pork in there along with some vegetables... the weird pickled sauce was a great compliment and the Moongazer Amber just seemed to work as it was smooth, golden and creamy. The vinegar took nothing away which I found surprising. 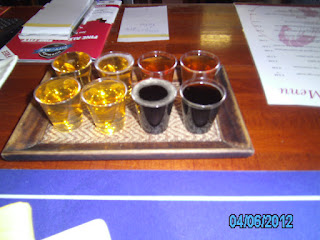 The two Bags of Gold (Minced Pork with Thai herbs in a wonton parcel) we paired with the only beer left... Oakham JHB – We were well aware that they were meant to go with sweet chilli sauce but decided to experiment to see if we could find anything better. And we did. A Creamy Plum Sauce. Wow. It worked. It worked well. The light, biscuity citrusness of JHB did well with the pork and sweet, creamy plum sauce.

Sadly that was the end. We were left craving more.

I think we both agreed that the first match of Chicken on Toast & Homemade Soy Sauce with Black Panther was the best pairing of the day. It was simply phenomenal.

My second favourite, personally, was the Thai Fish Cake & Pickled Sweet Chili Sauce with Budvar. I absolutely love Budvar but shit. This was a great pairing.

All in all, it was a phenomenal experience and I would love to do it again. Justin & I were talking on twitter earlier about trying to get the lady who owns The Vine to allow us to do a Mikkeller & Thai Food pairing. It would be amazing.

I wanna thank Justin for coming to Norwich and suggesting this pairing!

That was the end of my official City of Ale business. Bring on next year.