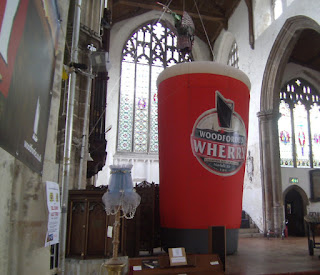 Last Thursday I went to the City of Ale launch party at St Gregory's in Norwich but before I tell you all about that, you should know a little bit about City of Ale...

City of Ale was started by Phil Cutter of The Murderer's & Dawn Leeder in 2011 and is a 10 day celebration of the many great breweries and pubs in and around Norwich. We love our ale, we do!

During the 10 long and beery days many events occur such as the launch party, the brewers market, pub crawls on a big red bus and much more.

I got a ticket to the launch party as I felt that it was my duty as a Norwich beer blogger to review it (and possibly have few beers).

St Gregory's is a wonderful old church, such a great location to launch City of Ale.

When I first got there I knew exactly which beer I needed to have: Golden Triangle City Pale. I had been dying to drink it ever since Kevin told me about it on twitter. It was everything I hoped it would be. You can read my full review here.

After a while, Dawn Leeder got on stage and talked about the festival, thanked everyone for coming and introduced the Lord Mayor of Norwich. Lord Mayor seemed to be loving it... He spoke about how great Norwich is for pubs and ales then officially declared City of Ale open.

I sampled many different ales over the night including Adnams jubilee ale and a ruby ale by a newly opened brewery called Norfolk Brewhouse which was quite good... Nice and dark, a little fruity and a hint of chocolate.

I also managed to eat many pork pies and spicy cocktail sausages... I'm not sure who provided these but whoever it was has my approval. Apparently there was also Thai food but everyone ate it whilst I was talking to The Ultimate Warrior Queen of Beer. Damn that lady.

There was music too... Acoustic music. Really, it was just background music which was nice. Anything you had to pay attention to would’ve been pointless as it was nice just standing talking with some sound in the background. Props to James Veira and Jon Christophers for bringing the noise, I certainly enjoyed it!

The one thing that if you follow me on twitter or are a facebook friend you would’ve noticed is that I was quite unhappy that Greene King IPA was branded onto the official City of Ale glassware. As any real ale fan will tell you, Greene King IPA is crap. I was angry. I was then told that the only way that Greene King would allow their pubs to be involved in City of Ale which makes sense but still, it's a crap beer.

Over the next week I'll have a few more City of Ale related posts online including pub crawls with some Yorkshiremen and a beer and Thai food pairing session with a chap from Essex. Watch this space!