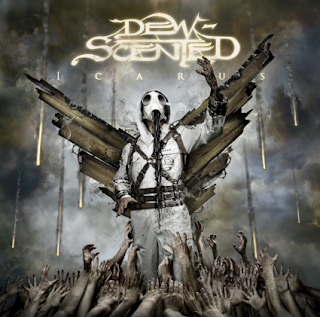 Dew Scented are a Thrash Metal band who are now in their 20th year of making people headbang. They’ve played a whole host of festivals all over Europe, including Wacken Open Air, Bang Your Head & Summer Breeze and had also embarked on a 16 country world tour with Nile & Melechesh.

Now, they bring you their ninth studio album; Icarus.

The album opens with a very nice, atmospheric & acoustic intro on Hubris which flows right into some heavy thrash metal while still conveying the atmosphere of the beginning which flows into the shredding guitars and drum build up of Sworn to Obey. Musically this is classic thrash metal all over. It’s fast and heavy but I was shocked when the vocals came in; however, as they are not what I’d expect from a band who describes themselves as thrash metal. The vocals are skilful and somehow fits but they’re leaning more towards deathcore than thrash.

Thrown to the Lions starts off with a wonderfully thrashy guitar groove and incredibly fast and heavy drums before an almighty death growl wakes you up. This grooviness continues throughout the song which is really quite awesome.

The album continues with a fast, heavy & thrashy groove but no two songs sound the same which is something I usually find with this genre.

The whole album is well thought out and heavy as fuck which is exactly what we’re looking for when it comes to a band of this calibre.

You can also listen to the full album stream here:

The album is out now on Metal Blade Records in Europe and Prosthetic Records in North America.