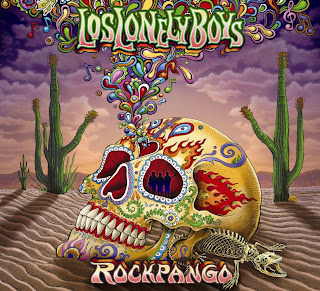 Los Lonely Boys are three ‘Texican’ brothers who debuted in 2003 with a multi-chart gold single, selling millions of albums, winning a Grammy, racking up reams of critical acclaim, opening for The Rolling Stones and many more accomplishments including being featured on guitar hero: on tour with their single, Heaven.

Rockpango is their fourth studio album and their first to be self-produced.

The album starts off with a heavy rock groove on American Idle then starts to sound more… well, Mexican. You’ve got really groovy guitars with some light drumming in the background and semi-aggressive rock vocals – at one point during the song he starts singing in Spanish which brings a bit more flavour.

The next track, Fly Away, is acoustic and sounds more Texan than Mexican. It’s generally more chilled out and country than funky and groovy like the previous track.

My favourite song the album is 16 Monkeys. It’s got that Tex-Mex feel to it but with a Stoner Rock edge which is awesome as I am a massive fan of that kind of music. Henry Garza’s vocals really shine on this track for me and the lyrics are great – “16 monkeys on a chuck wagon rollin’ down the road; they going round town tellin’ everybody ‘let’s get stoned’”. Let’s take their advice.

All in all, this album quite unique and the brothers are good at what they’re doing.

This certainly is an interesting album and if you like rock ‘n’ roll, The Deep South and Mexican food, I’d highly recommend buying this album for a night of tacos and tequila.

Los Lonely Boys – Rockpango is out now and available from all good music retailers.