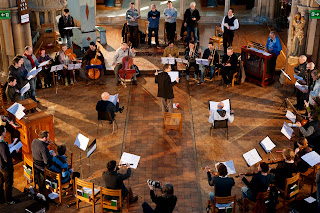 I never enjoyed Shakespeare’s works at school. I always appreciated that Shakespeare was an incredibly talented playwright who changed the way we see performing arts and the way we use the English language but it just wasn’t for me. Maybe it was because I wasn’t middle class enough or maybe it was because I was stoned all the time in high school and didn’t really understand what the fuck was going on. I don’t know; it just wasn’t for me.

Fast-forward a few years and I get a press release in my mailbox.

“The album reinvents Shakespeare’s Sonnets into modern music with the use of rare and exquisite Elizabethan instruments.”

Well, this sounds intriguing. Read on.

11 of Shakespeare’s sonnets performed on instruments from the early 17th century (That are worth £10,000 upwards) using only Shakespeare’s lyrics with no additions made, although occasionally lines have been moved around to fit the contemporary song structures. The meaning is never altered and the emotional content of the sonnets is always sustained.

The album was directed by Gramophone Award wining Robert Hollingworth and will be eligible for The Mercury Music Prize, an Ivor Novello & a Brit Award.

The artists involved signed their first record deal with Universal in London on Thursday 19th April and the deal was actually inked on Parchment using Quills which I think is pretty damn cool and true to history (well, apart from the act of recording music).

So, which of your favourite sonnets have been recreated for your pleasure on Shakespeare – The Sonnets?

It really is a wonderful album, they've taken the sonnets that we know and love from Shakespeare given them a classical yet modern twist. All of the instrumentalists are incredibly talented - it's hard to find people who can play instruments such as virginals and theorbos - as well as incredibly beautiful modern vocals.

And what better way is there to showcase everything great about British literature than to have this amazing project playing live at the London 2012 Olympics opening ceremony? If you have tickets, you are very lucky indeed; if not, I'm sure you can catch it on T.V. (Not very Shakespearian, I'll admit).

Check out a sampler with 5 of the sonnets featured, below:

You can purchase the album from Amazon or any good music retailer: