By Unknown - July 09, 2012
Well, well, well; you're in for a treat! I have asked my good friend Rich The Beer Glass Collector to review the three beers he bought from Two Cocks brewery (Which you may remember from a blogpost of mine) and he kindly obliged. Below is what he has to say: 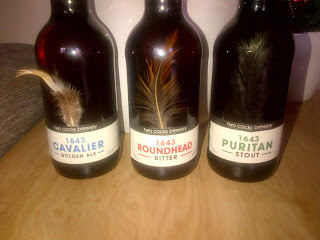 "Although I’ve attempted to review beers in the past I’ve rather given up on doing it as they usually boil down to something along the lines of “Ooo, I like this one” or “Ugh, that ones not too nice” – perhaps I just haven’t got an educated palate, perhaps I just need to practise more, perhaps I should just stick to drinking beer rather than writing about it………………….

Anyway this review came about after fellow Facebook friend, beer blogger, music reviewer and all round good guy Nathaniel “Nate Dawg” Southwood set off an amusing thread about 2 Cocks Brewery. Now living in rural Berkshire which possibly has the least amount of breweries per county in England, 2 Cocks caused a bit of excitement within the local drinking community when they went into production last year. Things have quickly gone from strength to strength for Phil and Michael with their beers finding their way into pubs across the country and they’ve established a very strong local fan base with their cask ales in the pubs around West Berkshire.

Unfortunately for me I was unable to take part in either of these events and somewhat ashamedly realised I was yet to sample their beers, so taking all of the above into account I recently bought some of their bottled range; 1643 Cavalier, 1643 Roundhead and 1643 Puritan. History buffs amongst you will note the date as being that of the Civil War Battle of Newbury, which took place just down the road from the brewery buildings. 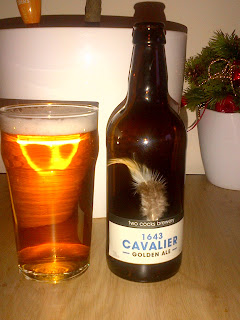 I started with the 1643 Cavalier, described by 2 Cocks as a “thirst quenching golden ale” at 3.8% vol. The colour was very light, straw coloured with a pure white head and the beer cleared to a really nice crystal clear colour in the glass. There was lots of carbonation but it wasn’t fizzy. You could certainly get a whiff of the hops on the nose but there was also a sour winey twist to it as well, there was also something sweet lingering in the background but I couldn’t sense what it was. The taste was sharp and cutting, slicing through the taste buds with a huge long bitter finish and it certainly lived up the thirst quenching claim of the label. There was still something sweet there which I couldn’t quite put my finger on. 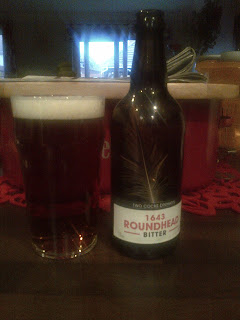 The 1643 Roundhead on the other hand is a 4.2% bitter which the brewery describes a “full bodied smooth best bitter” made with Cascade and First Gold hops. It pours to a dark burnished copper with a fluffy white head and only minimal carbonation. The scent is slightly malty but I couldn’t really get any more than this. The taste is much more rounded in the mouth than the Cavalier, very smooth but with a bitter finish that has a subtle metallic twang just as you swallow. 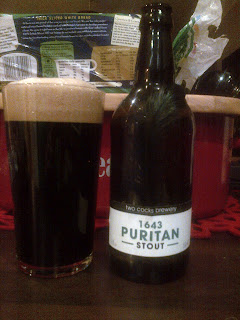 Finally I could crack open the 1643 Puritan Stout, which I’d left until last as the darker beers are usually my favourites. This is a 4.5% stout with “notes of caramel and chocolate” and it certainly looked the business with the classic dark black stout colour which reveals to be a deep ruby red when held to the light. The head was a thick creamy dirty white and the scent was by far the strongest with a sweet hint of caramel amongst the ripe burnt malt. But the taste was somewhat of a revelation, being an easy-drinking, almost sipping stout whereas I’d expected a much harsher, bitter sensation. There was gentle roast rolling around the full mouth and deep satisfying bitterness, but I have to say I wasn’t getting much in terms of chocolate. That said though it’s still a hugely enjoyable drink and one I must return to.

I recently commented on one of Nate’s other blog posts that I wish new breweries would concentrate on producing a good solid range of standard styles before branching out into the weird and wonderful and you have to commend 2 Cocks for doing exactly this. These are three very fine ales, each very true to their own style but all three being far from boring interpretations and I would heartily recommend them to one and all.
Final word about the bottles is the lovely cute addition of a cock’s feather to the bottles which is just about gimmicky enough for my liking!"

I want to thank Rich for taking his time to do this for me as my first guest-blogger.

I highly recommend you check out his blog, it's called Playing Monopoly With The BGC and is an awesome concept, he's a great writer too: http://monopoly-with-the-bgc.blogspot.co.uk

Now, go out and get two cocks down your throat!