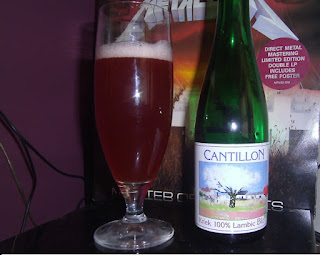 Woah. My first beer review in a while. I talk about beer a lot (only sometimes) but I don’t get round to reviewing any. Shame on me.

This time, it’s Cantillon Kriek which my good friend Stephen from Humpty Dumpty Brewery in Reedham, Norfolk brought back from his travels for me. I’d highly recommend checking out Humpty Dumpty, while we’re on the subject; they have a great range of beers in both bottle and cask

Now, onto the beer in hand (or glass – I can’t really type whilst holding a beer).

A while ago, I announced on twitter that I’m not a fan of Lambics or Sour Beers. This shocked and offended many people including Glyn, who then decided that he needed to change my mind. Last Friday I met with him in The Rake in London and he shared with me a bottle of CantillonGueuze. My mind was changed. It was awesome. I was then at Reedham Beer Festival and Stephen who had said previously that he would give me a bottle of Duvel Triple Hop presented me with two bottles of that and surprised me with this bottle of Cantillon Kriek, so in thanks, I have decided to review it.

An opaque strawberry colour with a very fizzy and quick to die pink head.

You first get hit with very tart lip-puckering cherries, wood, yeast and funk. It really reminds me of the cherry variant of the Toxic Waste sweets we had as a kid (I’m sure you remember the ones. They came in a barrel).

Very dry, fizzy and acidic but it just seems to glide across your tongue very cleanly.

LAMBICS. FUCK YES! I want more and more Cantillon beer all the time. Give me more. I love it.

Many thanks to Stephen for being so kind and giving me this bottle. Definitely check out his Brewery. I’m not on commission; I just love their beers!